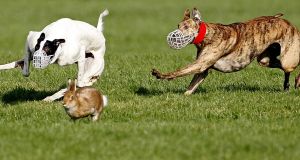 Minister for Culture Josepha Madigan was called to a heated meeting with rural Fine Gael Ministers, TDs and Senators this week over a ban on hare coursing amid concerns the party was being perceived as having an anti-rural bias.

Ms Madigan, a TD for Dublin Rathdown, is also understood to have privately queried one of her Fine Gael ministerial colleagues on accounts of his attendance at a rally calling for the ban to be lifted. Ms Madigan introduced the ban in August.

Brendan Griffin, the Minister of State for Sport and a Kerry TD, attended the rally last weekend, which called for the ban to be lifted. It was introduced because of an outbreak of a virus affecting rabbits and hares.

Sources said 16 members of the Fine Gael parliamentary party attended the meeting with Ms Madigan in Leinster House on Wednesday to express their concerns.

Ms Madigan, Minister for Agriculture Michael Creed and Minister of State at the Department of Agriculture Andrew Doyle are all working on an attempt to resolve the issue.

Sources said the meeting heard concerns the Government could be seen as having an anti-rural agenda. It follows Fáilte Ireland and Tourism Ireland ending the marketing of greyhound racing because of animal welfare concerns expressed by Minister for Transport Shane Ross.

“That peppers through,” said one source, of worries that rural voters could be angered. “Let’s call a hare a hare.”

Another source at the meeting suggested Ms Madigan was “roasted”, although other accounts differed.

“It got passionate,” said one TD. Another said a letter Ms Madigan sent to TDs on the issue yesterday was a “a result of that intensity” at the meeting.

In her letter, Ms Madigan told TDs her department was working on a “road map” that would allow for the collection of hares in a number of locations for testing.

She said this would inform the “possibility of limited licensing” for this coursing season. The season normally lasts between autumn and spring.

At the meeting Mr O’Donovan, Minister of State in the Department of Public Expenditure and Reform, said TDs were under pressure on the issue.

Mr Griffin said those at the rally he attended were of the view Ms Madigan was against coursing, and added that if she wasn’t then she should say so publicly.

“She told us she understands it,” one source said of Ms Madigan, adding: “She is a bit paranoid about being from south Dublin.”

Mr Griffin also contested the process behind the ban, in particular a list of confirmed or suspected cases of disease in hares. He said the list included a dead hare found in Kerry that was classified as being suspected of having the disease, even though the hare was in fact too decomposed to be officially tested.

Mr Coffey said the ban was a “live issue” but added Ms Madigan had his “full support and confidence”.