Borderline chaos: How the deal was brokered – and then broken

Taoiseach Leo Varadkar said he is “surprised and disappointed” the British government was unable to conclude a deal he believed had been agreed on Irish Border after Brexit. 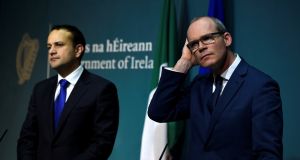 “I am surprised and disappointed that the British government now appears not to be in a position to conclude what was agreed earlier today.”

Taoiseach Leo Varadkar – flanked by Minister for Foreign Affairs Simon Coveney and Minister of State for European Affairs Helen McEntee in the Government Press Centre – said the words slowly and clearly. It was hard to remember a taoiseach saying anything like it about the British government since the days long before the peace process, before even the Anglo-Irish Agreement.

The meaning of Varadkar’s words was unmistakable: the British government had made an agreement and was now going back on it. That this had happened was testament to the political uncertainty – chaos might be a better word – in London. That the Taoiseach told everyone about it showed everyone how much relations between Dublin and London had deteriorated.

Varadkar repeated his surprise and disappointment several times during the 24-minute press conference. He insisted that he was willing to give the British more time. He might even be willing to change some of the language in the agreement – but not, he emphasised, its meaning. If the British could not agree to stick by what they had already agreed, then there would be no deal, and the Brexit talks would stall. There would be no progress until Dublin was happy.

It was a spectacular unravelling to a day that had begun brightly for the Government. The morning had seen news of the long-awaited and much-anticipated breakthrough in the EU-UK talks within hours of a crucial meeting between Theresa May and the European Commission president Jean-Claude Juncker. The talks are officially between the EU and UK delegations, but the Irish have effectively been a party to the negotiations in recent weeks as the Border issue came to dominate proceedings and disagreements.

After days of intensive negotiation between British and Irish officials, the weekend heralded a breakthrough. Coveney, recently minted as Tánaiste and who has maintained a tough line in public throughout the talks, went on Morning Ireland to announce that he expected an agreement to be announced later in the day. It would meet all of the Irish Government’s concerns, he said. What Coveney didn’t say but many in Dublin believed was that UK had backed down in the face of Irish demands.

There was a logic to this. After all, it has been exactly how the talks have progressed so far. Since Theresa May triggered Article 50 in March, the UK has conceded on nearly all of the substantial points: on the two-stage nature of the process; on the applicability of EU law during the transition phase; on citizens’ rights; on the size of the divorce bill that the UK will have to pay.

Now, according to the Irish Government, the UK had indicated that it was willing to meet Dublin’s requirements for a clear guarantee that whatever deal would be agreed between the EU and the UK on the future relationship, it would avoid a hard Border between the two parts of the island.

Making an explicit promise to avoid any return to a hard Border meant that this principle would underpin future negotiations – which will largely focus on the trading relationship – between the EU and the UK. It would mean that whatever was agreed, it couldn’t lead to a hard Border, because the UK would have already promised to rule that out.

Varadkar had already called a special meeting of his Cabinet for 9am to sign off on the deal that emerged over the weekend. When Ministers met, there was no final word from Brussels, but Varadkar and Coveney briefed Ministers on what was expected later that day.

At 11am Coveney was summoned out of the Cabinet room for a phone call from Juncker in Brussels, where he was told the EU and UK teams had agreed the final draft. Coveney asked Varadkar out. The Taoiseach read the key passage from their text down the phone to Brussels to confirm that the British had agreed. Juncker confirmed they had.

Diplomacy is largely about subtlety. The way that officials had found to break the deadlock was to remove a pledge for “no regulatory divergence” in the text and replace it with a promise that “regulatory alignment” would be maintained.

The Taoiseach said later in his press conference that the two things meant the same thing, although some of those involved in the process said that was not quite the case. “Alignment” sounds a bit weaker than “no divergence”, and that was certainly the British view. But crucially, for the Irish side, the British had made what they viewed as a “cast-iron” promise that there would be no hard Border; that meant a special deal for Northern Ireland.

The details could be worked out in phase two. But a subtle distinction to one is a dangerous ambiguity to another. And the plain-spoken men and women of the DUP are suspicious of ambiguity, especially when they smell betrayal in the air. And subtlety, in any case, is not the DUP’s strongest game.

For all the DUP scaremongering about Dublin’s designs on the North through the Trojan horse of Brexit (which presumably they know is poppycock), it’s hard to avoid the conclusion that what the DUP fears is what unionists have always most feared – not Dublin’s designs, but betrayal by London.

By mid-morning, DUP hackles were rising. The party’s Westminster MPs – who often mix in Brexiteer circles in London – were tuned into the happy sounds coming out of Dublin, and they were getting increasingly uncomfortable.

RTÉ’s Tony Connelly was reporting the “regulatory alignment” line. The Irish Times confirmed the Government’s view that a deal was done. Others were listening too. Scottish first minister Nicola Sturgeon, mayor of London Sadiq Khan and first minister of Wales Carwyn Jones were all hearing about a deal whereby Northern Ireland could maintain access to the single market. We’ll have a bit of that too, they all said.

DUP MP Sammy Wilson insisted the British government would never sign up to what was being reported. Some in London and many in Dublin were pretty relaxed about the DUP’s growing concerns.

Although the DUP supports May’s government under a confidence-and-supply agreement, the prospect of bringing down May’s administration is a nuclear button that few believe the DUP are willing to press. What comes after it? A government led by the “former IRA sympathiser” Jeremy Corbyn?

Besides, the Irish were tired of pointing out that the North isn’t the same as the other regions of the UK. It is different – a difference acknowledged by the British government in the Belfast Agreement. But this fact appeared to be lost on the DUP as well. And the Irish underestimated the pressure on May. So did everyone else.

The deal was off

May went into her lunch with Juncker in Brussels ready to sign off on the morning’s deal – not just on Ireland, but also citizens’ rights and the financial settlement – to clear the way for the phase two talks to be rubber-stamped by EU leaders next week. Midway through lunch, May stepped out to take a call from the DUP leader Arlene Foster. By the time she returned, the deal was off.

In Dublin, the Government had arranged a press conference for 2.30pm. But just before 2pm, Juncker called again. There was a problem. The press conference was postponed. Go and get a cup of coffee, journalists were told.

When it eventually convened, at 5.15pm, the mood had swung wildly. Varadkar didn’t mince his words. The British had agreed, and then withdrawn. It was now up to them to come up new language, but the Irish would not be budging from the substance of their position.

In Brussels, Juncker and May spoke briefly about “further consultation and further negotiation”. Then they turned on their heels, taking no questions. Perhaps because they had no answers.

This morning, as officials try to pick up the pieces with a deadline looming over their heads, British-Irish relations are as fraught as they have been in 30 years or more.