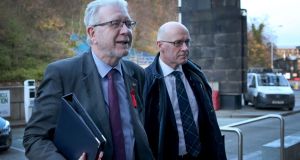 Theresa May’s failure to agree a deal on the Irish Border was evidence of “a deep-seated incompetence at the heart of the British government”, Scotland’s Brexit minister has said.

Speaking to The Irish Times at the end of tumultuous day, Michael Russell said that the Conservative leader’s apparent climbdown was “a particularly dramatic illustration that the left hand doesn’t know what the right hand is doing”.

Earlier in the day, reports that the UK had conceded on an arrangement that Northern Ireland and the Republic could maintain regulatory alignment after Brexit were widely welcomed in Scotland, where a strong majority voted against leaving the European Union.

At lunch time Scottish first Minister Nicola Sturgeon tweeted that Scotland should be allowed to “effectively stay in the single market”.

Mr Russell, who was in Dublin late last month for a conference on Brexit, said the UK government had bowed to pressure from the DUP rather than accept the only solution to the Irish Border issue.

“It is only by staying in the single market and the customs union that you can have a frictionless Border.

British government ministers had previously maintained the all parts of the UK would leave the EU on the same time. The Scottish Brexit minister said that May’s apparent willingness to sign a bespoke deal for Northern Ireland meant that similar arrangements could be made for other devolved governments.

Monday’s dramatic developments would make a deal between the UK and the EU even more difficult, said Mr Russell.

“We hope that a deal can be done but it doesn’t bode well after today.”