Border community must work with police to stamp out ‘total lawlessness’, says Coveney

Tánaiste: Attack on Quinn executive ‘a reminder of gangland paramilitary-style punishment beatings of past’ 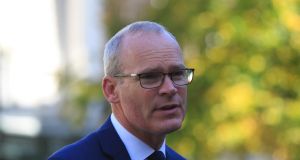 Simon Coveney: There are many people who know who these people are and who is behind the brutality and intimidation. Photograph: Gareth Chaney/Collins

People living along the Border have an obligation to help stamp out “brutality, intimidation and total lawlessness”, Tánaiste Simon Coveney has declared.

Calling for co-operation with the PSNI and the Garda following the attack on Quinn Industrial Holdings (QIH) executive Kevin Lunney, Mr Coveney said the attack was shocking and the “action of cowards”.

“It is a reminder of gangland paramilitary-style punishment beatings of the past and I don’t say that lightly,” the Tánaiste told the Dáil, adding that the Garda and PSNI would relentlessly pursue those responsible.

“There is an obligation on communities in this area. There are many people who know who these people are and who is behind the brutality and intimidation, the total lawlessness that happened,” he said.

Saying locals need to come forward with information, he added: “This is not what people living in Border countries want or will accept, and they need to work with both the PSNI and An Garda Síochána to stamp it out”.

Minister for Justice Charlie Flanagan, who described the attack as “barbaric” said “there is no question about the lethal, terrorist intent of paramilitary groups and the persistent threat they present”.

He also mentioned cross border efforts to combat mobile organised crime groups responsible that had been responsible for multiple crimes including burglary.

Mr Flanagan told Cavan Fianna Fáil TD Brendan Smith that this was the wider context for the increase in Garda resources in the area with 372 gardaí assigned to the Cavan/Monaghan Division and the development of a Cavan-based armed support unit.

Mr Coveney said the community needed to respond to “quite frankly what could have been a man’s death but was a brutal assault which is going to have such an impact on his family, and it’s something that needs a policing and justice response”.

The Tánaiste was responding to Fianna Fáil deputy leader Dara Calleary, who said there had been a worrying pattern of attacks on people and property culminating in this savage attack on Mr Lunney.

Mr Calleary said there was “no room on this island for that kind of attack” but he pointed to frustration and anger of the chairman of QIH that more had not been done.

“There seems to have been a complacency about pursing those responsible for this issue,” he said. “This has been the culmination of a number of attacks going over two years including a previous attack on Mr Lunney (who had) his nose broken and an attack on another executive who had boiling water poured over him”.

Mr Calleary told the Tánaiste “people are getting away with this” and the Government had to send a “signal of confidence” to the community, to business and investors that this will be pursued.

Mr Coveney said both police forces would give it the highest priority.His comments about the need for the community to come forward with information was echoed by Sinn Féin deputy leader Pearse Doherty.

Mr Doherty reiterated his party’s condemnation of this “vicious and abhorrent attack on Kevin Lunney who was and just doing his job and part of creating employment for many people in the Border community”.

Mr Doherty echoed the Tánaiste’s words and said “there is no justification for anybody to shield those who are behind this attack and indeed any other attack in relation to other individuals and property in relation to Quinn Holdings”.

He encouraged people to bring any information they had to the authorities “because this needs to be stamped out and stamped out quickly”.