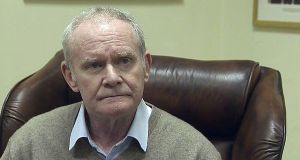 Northern Ireland’s former deputy first minister Martin McGuinness. “His actions have meant that, at precisely the time we need our government to be active, we will have no government,” said outgoing First Minister Arlene Foster.

Northern Ireland is facing Assembly elections after Martin McGuinness resigned as Deputy First Minister over Arlene Foster’s refusal to step aside in the “cash for ash” row.

Mr McGuinness, whose health has visibly deteriorated over the Christmas period, made his announcement at Stormont Castle on Monday afternoon. He insisted his health was not a factor in his decision to resign.

He formally stood down as Deputy First Minister from 5pm on Monday evening. As theirs is a joint office, Ms Foster’s role as First Minister also ceased, although she will still carry out some minimal non-executive functions.

“There will be no return to the status quo,” said Mr McGuinness, who called for snap Assembly elections to be held.

Sinn Féin has until Monday to nominate an Assembly member to replace Mr McGuinness. He was adamant the party will not be changing its position, although if Ms Foster did agree to step aside temporarily, as Sinn Féin has been demanding, it is possible the Sinn Féin position could alter.

Ms Foster has insisted she will not temporarily step aside pending an investigation into the renewable heat incentive (RHI) scheme, which ultimately could result in an overspend of up to £490 million.

If there is no resolution after seven days, Northern Secretary James Brokenshire will call elections within a “reasonable” period. The earliest elections can happen are 43 days from Monday January 16th.

Asked would he stand again if elections are called in the coming weeks, he said he would address that matter at the time.

“Over the last 10 years I have worked with DUP leaders and reached out to unionists on the basis of equality, respect and reconciliation,” he said.

“Over this period the actions of the British government and the DUP have undermined the institutions and eroded public confidence,” he added.

“Sinn Féin wants equality and respect for all. That is what this process must be about. Today I tendered my resignation. Today is the right time to call a halt to the DUP’s arrogance.”

The outgoing First Minister said she was “disappointed” at her deputy’s announcement.

“His actions have meant that, at precisely the time we need our government to be active, we will have no government and no way to resolve the RHI problems,” added Ms Foster.

“The DUP will always defend unionism and stand up for what is best for Northern Ireland and it appears from the Deputy First Minister’s resignation letter that is what annoys Sinn Féin the most,” she said.

SDLP leader Colum Eastwood said Ms Foster’s “arrogance” caused the dispute. He said his party was ready for an election but that an election campaign meant “that those behind the ‘cash for ash’ scandal can now enjoy a two-month break from any effective public inquiry or police investigation”.

Alliance leader Naomi Long said the DUP has “recklessly endangered” the political institutions. She said the public clearly want the First Minister to step aside for the duration of an inquiry, but her “inability to swallow her pride” and her “belligerent attitude” has placed her party on a collision course with Sinn Féin.