McGuinness resignation: Why did he quit and what happens next?

Guide to the Northern Ireland Assembly 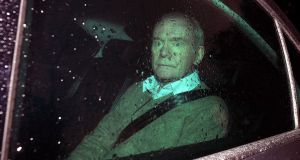 Martin McGuinness has announced that he is resigning as Deputy First Minister over the refusal of First Minister Arlene Foster to step aside in the so-called “cash for ash” row. His resignation comes after weeks of discord between his party, Sinn Féin, and their partner in the power-sharing administration, the Democratic Unionist Party. In a statement on Monday evening, Mr McGuinness said the DUP’s handling of this issue had been “completely out of step with a public mood which is rightly outraged at the squandering of public money and the allegations of misconduct and corruption.

What’s this “cash-for-ash” scheme all about?

The row centres on the Renewable Heat Incentive Scheme which was set up in November 2012, and run by the North’s Department of Enterprise, Trade and Investment when current DUP First Minister Arlene Foster was its minister. The non-domestic element of the scheme was designed to encourage firms, businesses and farmers to switch from fossil-fuel heating to biomass systems such as wood-burning boilers. The Northern Ireland system, unlike a capped system in Britain, was flawed because there was no limit on usage and subsidies were over-generous. In short, for every £1 that users spent on their green heating systems, they got back £1.60 in subsidies. It was described as “cash for ash” or “the more you burn the more you earn”.

2. Arlene Foster, as a consequence, loses her post of First Minister, although she can still fulfil some minor non-executive functions.

3. There are seven days in which Sinn Féin could nominate a new Deputy First Minister. (This will not happen, according to Sinn Féin).

4. The Northern Secretary James Brokenshire, after seven days, must call fresh Assembly elections within a “reasonable period”. The earliest elections can happen are 43 days from next Monday.

5. Mr Brokenshire also has the power to bring in emergency legislation to suspend the Stormont institutions until there is some possible resolution of the current crisis.

The basics about the Assembly

The Northern Ireland Assembly was established under the Belfast Agreement in 1998. It is made up of 108 Members of the Legislative Assembly (MLAs) – six from each of the 18 constituencies – with control of departments such as health, education and agriculture devolved to the Assembly. The Assembly works (or doesn’t) according to a power-sharing model - taking into account the two main political factions in Northern Ireland - unionist and nationalist. Elections to the Assembly are held every four years – though the current one looks unlikely to last even 12 months.

The 2016 NI Assembly elections were held last May, with the DUP remaining the largest party, claiming 38 seats – the same number as in the 2011 elections. Sinn Féin lost a seat, but remained in second place on 28 seats, with the Ulster Unionists maintaining the 16 they had before the election. The SDLP dropped two to 12 seats, while the Alliance Party returned with eight. The Greens and People Before Profit Alliance secured two seats each, with TUV leader Jim Allister remaining its sole representative.

Recently proposed changes by the Boundary Commission brought bad news for the current MLAs. It is going to be a dogfight – even more than usual – at the next election, with a reduction from six to five MLAs for each constituency. That means that, instead of 108 MLAs, there will only be 90 after the next election.