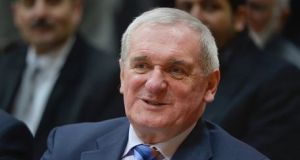 Bertie Ahern said: “I wouldn’t like to be a John Hume over there [in the US] now trying to get attention, whether it was [for] Turkey, Syria, Angola or Sudan...” File photograph: Getty Images

Former taoiseach Bertie Ahern has said he “would not like to be a John Hume” in the US now, trying to elicit support for peace in Northern Ireland.

Speaking at the screening of a documentary about Mr Hume at the Galway Film Fleadh, Mr Ahern paid tribute to the former SDLP leader and 1998 Nobel Peace Prize winner’s tireless work in the US. However, he noted the atmosphere in Washington DC now would be very different.

“I wouldn’t like to be a John Hume over there now trying to get attention, whether it was [for] Turkey, Syria, Angola or Sudan. I think it would be a hard job to do, even if you were John Hume,” Mr Ahern said, to applause.

Mr Ahern also reiterated his view that the two main parties in the North should sort out their differences and fulfil their obligations to their electorate in relation to pressing issues such as Brexit.

“It really irks me that the people of Northern Ireland are being treated in this way, and when they desperately need their political leaders to be playing a full role... in that they are arguing about other things,” he said.

Mr Hume’s wife Pat Hume was among the packed audience at the screening of In the Name of Peace: John Hume in America, directed by Maurice Fitzpatrick, at Galway’s Town Hall Theatre.

SDLP MLA Claire Hanna, who participated in a panel discussion after the screening with Mr Ahern, Prof Paul Arthur and Mr Fitzpatrick, concurred with Mr Ahern’s frustration in relation to the suspension of political activity.

“By going into opposition last May, we thought that , nearly 20 years on, the structures and the people involved were mature enough to deal with these problems,”she said.

The EU partnership involving Dublin and London had been crucial, and this would be lost after Brexit, she said.

Mr Ahern described his personal friendship with Mr Hume and how the latter had a “tradition of dropping off in Drumcondra”.

“His view was inclusivity... you tried and made as good friends as you could in Westminster, which wasn’t easy, and do it in America and do the same in Dublin,” Mr Ahern said.

“He realised you had to have power if you were going to have influence,” he said, noting there were not too many people who could walk into Leinster House and “doddle down” to the Fianna Fáil rooms and then to Fine Gael and “spend an hour in each”.

Mr Ahern said the idea of a North-South referendum on the Belfast Agreement had been Mr Hume’s idea, not his.

“The idea, which I think was a mastermind... was to put it very quickly to a vote North and South on the same day,” he said.

“This was on the basis that the last all-island vote was in 1918, which was perceived to have legitimised the armed struggle,” Mr Ahern explained.

Prof Paul Arthur, who grew up close to the Humes in Derry and was part of the civil rights movement, said his politics were to the left of Mr Hume initially.

“He changed my whole view of what politics was about,” Prof Arthur said, recalling a trip to the US where a former Republican of the US House of Representatives, Charlie Dougherty, had been instrumental in elevating the Northern issue to a cross-Congressional level.

“I began to see this was a different way of doing politics... personal conversation and quiet diplomacy,” Prof Arthur said.

He said the role of former US president Jimmy Carter in 1977 was crucial, as was that of Senator Ted Kennedy, who praised the role of the Ulster Scots in the north American heritage.

“It was the first attempt to widen it, and out of that everything flowed,” Prof Arthur said.

1 Covid-19: Contact tracers to start looking into where people are infected
2 Covid-19: Fears grow over increased restrictions for cities and local areas
3 Miriam Lord: Restricted movement for Leo as Micheál finds his stride
4 Traffic chaos as ‘singing and dancing’ woman stops car in middle of motorway
5 People who fail to self-isolate should be fined for their ‘selfish behaviour’, says GP
Real news has value SUBSCRIBE