New chief justice will not be in place when Denham retires 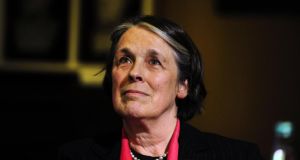 The next chief justice will not be appointed before Ms Justice Susan Denham retires from the post in August, it has emerged.

Instead, senior Government figures say, her successor in the judiciary’s highest post will be appointed in September or October, once the process announced this week has been completed.

After pressure from Minister for Transport Shane Ross, the Cabinet agreed this week that an ad-hoc committee would consider suitable candidates before the Government makes its choice.

The committee will consist of Jane Williams, chairwoman of the Top Level Appointments Committee; Mr Justice Sean Ryan, the president of the Court of Appeal; and Seamus Woulfe, the Attorney General.

But senior legal sources have pointed out that under the Constitution the decision to appoint a judge must remain with the Cabinet, and the committee will have to forward more than one name. The Department of Justice has acknowledged this.

Judges are understood to have previously believed that a successor to Ms Justice Denham would be nominated before Cabinet meetings were suspended for the August break.

The Irish Times understands this is not now the Government’s expectation. Instead the new committee will require several weeks to complete its work.

The Department of Justice last week said that the committee would be required “to establish its own procedures for inviting and assessing the expressions of interest from applicants”.

The department has confirmed that this will mean the post of chief justice will be vacant for a period following Ms Justice Denham’s retirement, but it is understood to believe that this will present no legal difficulties.

Government sources say they hope a new chief justice will be in place by the time the legal term begins, on October 2nd, although the hiatus could run into October.

The ad-hoc committee was set up after it became clear that the Oireachtas would not enact new legislation governing judicial appointments before the summer break.