Vera Twomey is in Netherlands to get treatment for daughter Ava (9), who has epilepsy 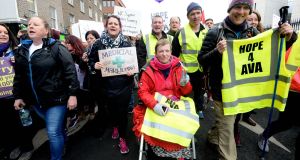 Vera Twomey, who marched to Dublin in support of access to legal medicinal cannabis to treat her child’s epilepsy, with Gino Kenny on their way to Leinster House. Photograph: Cyril Byrne

Campaigner Vera Twomey has called the rejection of the Bill to legalise cannabis for medicinal use by the Oireachtas Health Committee “a betrayal” of her daughter, Ava (9).

Ava, who has epilepsy, and her family are in the Netherlands to have her condition treated with medicinal cannabis.

“What issue is more important than people all over the country in chronic pain?” Vera Twomey said on RTÉ’s Today with Seán O’Rourke. She added that Kate O’Connell, the Fine Gael TD who revealed the decision of the committee on radio yesterday, and Minister for Health Simon Harris “should be hanging their heads in shame at what they’ve done with this Bill”.

Mr Kenny put forward the Bill, which was passed by the Dáil without opposition from the Government, in December. It provided for the regulation of cannabis for medicinal use, so that patients could receive a legally protected, safe and effective supply.

Ms O’Connell had said there were aspects of the Bill that caused the committee huge concern, insisting it was more about decriminalising the use of cannabis.

The Dáil committee’s report warned that, were the Bill to pass into law, it might also have the effect of decriminalising cannabis use for recreational users. It argued that there was a shortage of scientific, peer-reviewed evidence on the safety and effectiveness of cannabinoid treatments for medical conditions, despite initial encouraging medicinal possibilities

Ms Twomey said she was confused by the reaction of the Health Committee. “What is the role of politicians in the Dáil but to legislate effectively?”

Previously Ava suffered up to 20 seizures a day, but her mother says she is now on her ninth day without a seizure.

The family wanted as little disruption as possible for all their four children, she added. They are all in the Hague for the next two months while Ava is receiving treatment, but one parent will have to return to Cork in September when school restarts.

Ms Twomey said that they were relying on the generosity of the public, who had contributed to a GoFund page. “We are in an increasingly difficult situation. The neurosurgeon treating Ava would not sign off on her treatment abroad. So far it is the ordinary people of the country who have supported us.”

Kate O’Connell said on RTÉ’s Morning Ireland on Thursday morning that while there was no doubt about the anecdotal evidence on the medical benefits of cannabis, there were many strains that made it difficult to quantify and work out strength and doses and decide who can have it. There is a need for clinical evidence, and research would take time, she said.

On the same programme, Mr Kenny said he was not surprised at the findings of the Oireachtas Health Committee as “there was a bias against it”.

The report by the Oireachtas committee said the Bill has major legal issues and the proposed framework to allow patients access to cannabis for medical reasons is “too loose to effectively guard against leakage of supply to recreational users, [and] overuse by patients”.

The health committee report outlines that it is “concerned that the Bill proposes to remove cannabis from the Misuse of Drugs Act 1977”, which the report warns may have the effect of decriminalising cannabis use for all users.

It states “this seems in conflict with the intention of the Bill, which is to make cannabis available specifically for medicinal use as expressed in the title of the Bill. It is the view of the committee that this is not a safe course of action.”

Ms O’Connell said there are aspects of the Bill that caused the committee huge concern, insisting it was more about decriminalising the use of cannabis.

She added: “Our primary role as legislators is to safeguard the public. I believe today’s report does just that.”