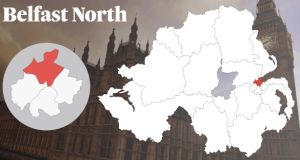 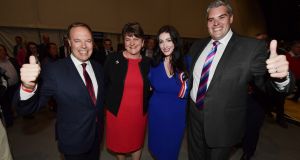 While Mr Dodds has held the seat since 2001 this was the highest vote that he recorded and the first time he exceeded 20,000 votes.

While he fell short he still won the highest vote that Sinn Féin ever gained in the constituency.

In the 2015 election, Sinn Féin Assembly member Gerry Kelly won 13,770 votes which at the time was the highest vote won by the party in the constituency.

Mr Finucane, who is also a solicitor, increased that vote by more than 5,000 votes.

Mr Finucane said he had received the “biggest mandate any republican ever received in North Belfast”. He declined to say, however, whether he would continue in frontline Sinn Féin politics.

Mr Dodds in his victory speech focused on his own high vote and his fifth successive victory. “The DUP has made history in North Belfast and there is more to come,” he said.

With his MEP wife Diane, DUP leader Arlene Foster and former leader Peter Robinson looking on, Mr Dodds said: “This election was fought in the face of terrible terrorist atrocities across the UK and in this next parliament the DUP will play a very important role in terms of the great challenges that this country faces.”

Mr Dodds said the DUP would make its “influence felt” in Westminster for the benefit of the people of Northern Ireland. This would include working to get the best Brexit deal for the North.