Minister for Agriculture Barry Cowen has been sacked by Taoiseach Micheál Martin who told the Dáil that the Offaly TD would no longer serve in Cabinet arising from continuing controversy over his drink-driving conviction. Video: RTE News/Oireachtas TV 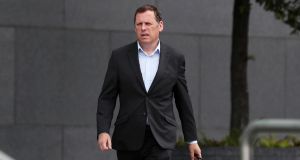 The dismissal of Barry Cowen as Minister for Agriculture by Taoiseach Micheál Martin has the potential to cause a serious rift in the parliamentary party, its TDs have said.

In the Dáil on Wednesday Mr Martin strongly stood over his decision to sack Mr Cowen on Tuesday night after the latter refused to make a further statement on the drink-driving ban he received in 2016.

But in a clear indication of his dissatisfaction with the Taoiseach and his decision to sack him, Mr Cowen told Fianna Fáil activists in his constituency that the party was “definitely bigger” than Mr Martin.

“FF is bigger than me. It’s definitely bigger than M Martin. I have apologised for my actions. I made a stupid mistake but I did not do what they have accused me of,” he texted.

The Taoiseach also told the Dáil he had “never sought in any shape or form to undermine . . . the accuracy or credibility of any Garda statement on the file”.

That put his position on the Garda Pulse report of the incident directly at odds with that of Mr Cowen. The Offaly TD has strongly refuted a statement in the report that he tried to evade a Garda checkpoint.

The Irish Times understands the Garda Pulse record is brief and says Mr Cowen turned his car off the road ahead of gardaí up ahead.

It suggests that when the gardaí went to check where his car had gone, they engaged him in conversation and detected the drink-driving offence.

Gardaí have also said they process requests for access to personal data without preferential treatment and do not carry out ministerial vetting.

Fianna Fáil TDs contacted yesterday said as many as a third of the party’s members would be sceptical of, or openly opposed to, Mr Martin’s leadership. One said a substantial minority believed the coalition with Fine Gael could lead to the ruination of the party.

Another TD said: “Those outside the fold believe Micheál is a spent docket. The only question is: will there be a challenge to him sooner rather than later?”

In a move widely expected, deputy leader Dara Calleary was appointed new Minister for Agriculture. Dublin West TD Jack Chambers has been named as Mr Calleary’s successor as chief whip with responsibility for the Gaeltacht. In a tweet he promised to work hard to improve his Irish. The Laois TD Sean Fleming has been appointed Minister of State for Finance.