Prepare for the worst, says technical note on the sector published on Friday 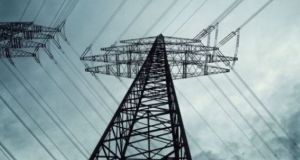 Cross-border electricity supply between Ireland and Northern Ireland could be left “without any legal basis” and unable to continue in the event of a no-deal Brexit, the British government has warned.

In a technical note on the sector published on Friday, it insisted it would do what it could to maintain current arrangements but said it had to prepare for the worst.

Northern Ireland shares a wholesale electricity market with Ireland, the Single Electricity Market, which operates under EU law. Negotiations have “already made good progress” on maintaining this arrangement as part of a future withdrawal agreement.

However, EU rules will cease to apply in Northern Ireland once the UK departs.

“Given the benefits to consumers and the economy of the more efficient, shared market, it is strongly in the interests of all parties to agree to a means to avoid the split of the market,” the document said.

The UK therefore intends on maintaining the single market, in conjunction with the Irish Government and EU, even in the event no deal is reached.

“However, if such an agreement cannot be reached, there is a risk that the Single Electricity Market will be unable to continue, and the Northern Ireland market would become separated from that of Ireland,” it said.

“Separate Ireland and Northern Ireland markets will be less efficient, with potential effects for producers and consumers on both sides of the border.”

SONI, it continued, may have to rely on fall-back arrangements to ensure power can flow over the Great Britain-Northern Ireland interconnector.

As things stand, the UK’s electricity markets are “coupled” with the EU and governed by common rules.

Significant cross-border flows of electricity take place between Northern Ireland and Ireland, the UK and the island of Ireland and between continental Europe and the UK.

In its advice concerning a potential “no deal” scenario, the UK has said interconnector owners and operators will need to work with stakeholders to prepare alternative trading arrangements and updated rules.

“However, market participants should be aware of the risk that the Single Electricity Market may not be able to continue, in which case government and the Northern Ireland Utility Regulator will take action to seek to ensure continued security of supply and market stability.”

Minister urges objectors to Cork flood relief plan to stop legal action 21:18
Man held after gardaí seize cannabis worth €800,000 in Dublin 21:10
People who throw house parties can be fined €1,000 and jailed for up to a month under new proposals 21:04
Extra day to Dáil debate on extending State’s powers during pandemic 20:27
Schools should not reopen after midterm unless safety improves, say unions 19:34