Varadkar is in a hurry, but Brexit may put brakes on election

Martin doesn’t want election, but wants Fine Gael to know he isn’t afraid of having one 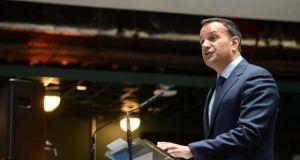 The election drumbeats are still in the mid-distance, but they are getting closer.

When Leo Varadkar sought to nudge Micheál Martin into resolving the future of the Government - one way or another - during the summer, Martin kicked to touch until after the budget. The ink on the budget book was hardly dry when the ball has been thrown back.

Martin doesn’t want an election, but wants Fine Gael to know that he isn’t afraid of having one. A complicating factor is that a goodly chunk of his own party is fed up with the confidence and supply agreement and wants done with it.

Both leaders have charged their officials with exploring how new talks can take place.

But the gulf between the two sides is already apparent. Varadkar wants the business wrapped up by early November. Martin reckons it’ll only be getting going by then. He wants a review of the current agreement, and only then should substantive new talks on a new agreement between the parties commence. What’s the hurry, he asks. Fianna Fáil has promised to support the Government until the Finance Bill is passed, and that’s not until the middle of December. Plenty of time.

But Varadkar is a man in a hurry. If there isn’t a new agreement, he wants the option of a general election this year. He’s riding high in the polls. He doesn’t want, says one his Cabinet ministers, to be “trapped by Fianna Fail”, who could then cause an election in early 2019, with hospitals creaking and homelessness still visibly chronic.

The big brake on a 2019 election remains Brexit. There is a view in Fine Gael that after a few inconclusive weeks of negotiations with Fianna Fáil, Varadkar could return from the mooted (but not yet confirmed) special EU summit on Brexit - the one that would seal a deal with the UK, all going well - and immediately run to the country, with a polling date on December 7th.

He could, of course. He can call it when he wants. But this timetable ignores the need for whatever deal is agreed (assuming all the time that this is what happens) to be ratified by both the European Parliament and the House of Commons (though not all national parliaments, as some have assumed).

Theresa May’s final showdown will not be with her fellow European leaders; it will be with her own MPs (and the DUP) in the House of Commons. To put it mildly, that outcome will be uncertain. Which means that Varadkar will be unable to claim that Brexit is “settled” when he returns from Brussels, whatever the outcome.

None of this means he can’t call an election - but it does mean that Brexit won’t be completely out of the way. Which in turn means that the premise of calling an election to achieve stability during the Brexit process will be deeply questionable. Frankly, it’s hard to see how he could stand it up. If Varadkar wants a 2019 election, he needs to find an answer to that question. In the meantime, Fianna Fáil will run down the clock on him.