As the UK’s departure from the EU approaches, businesses are still seeking clarity 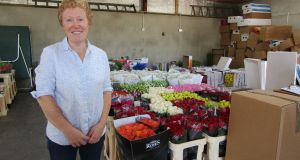 Majella Johnson, co-owner of Johnson Produce, wholesalers in fresh-cut flowers and plants. Their warehouse in Northern Ireland is yards from the Donegal border. Photograph: Freya McClements

From the outside, it looks like any other warehouse; inside, is a garden of flowers hidden right on the Border.

Twice a week lorries arrive from the Netherlands bearing their cargoes of sunflowers and carnations, roses and tulips; when full, the rows and rows of fresh-cut flowers are spread the length and breadth of the warehouse floor.

Johnson Produce, owned by husband and wife Bill and Majella Johnson, is as close to the Border as it’s possible to get.

Their side of the Coney Road in Derry is in Northern Ireland; the other side of the road is Muff, in Co Donegal.

“People come up and ask, ‘Are you in the North or the South’?” says Majella. “We’re just about in the North and no more.”

For the last 3½ years, they’ve given the same answer when asked how Brexit will affect their business.

He adds: “In recent times, life in this part of the world has just been seamless across the Border. People didn’t really think about it at all, and that was the big fear, that that way of life would be stopped. That’s not the case now.”

The Johnson’s flowers are dispatched almost equally between Northern Ireland and the Republic; they are the main suppliers of flowers in the northwest of Ireland, with deliveries as far south as Fermanagh and Cavan, and as far west as Sligo.

Their flowers are bought by ferry from the Netherlands to Harwich in the east of England, then are driven to Holyhead for the crossing to Dublin and then they are driven on to Derry via the border at Aughnacloy, Co Tyrone.

“As long as a hard Border stays off the table then that’s a huge relief,” says Bill. “The prospect of a hard Border does seem to have gone, but then [the UK prime minister] Boris Johnson’s promising things he can’t deliver. God knows what they’re going to agree [at the trade talks].

They are in a better position than most. As importers, with the threat of a hard Border removed, “when the lorry gets to the Border at Aughnacloy it will have to come straight on up,” says Bill.

“We’re probably less worried than we were, but a lot of companies, especially the exporters, they must be really worried.”

Bill and Majella set up their business 25 years ago. Bill, from the northeast of England, met Majella in Zambia, where he was working as a flower grower, and decided to set up their flower business in Majella’s home town of Derry.

“I remember at the time we were going round all the flower shops in Donegal and Derry trying to work out if there was a need for the business, so I had maps and questionnaires with me,” he says.

“I only had an old car which was forever breaking down, so there were a lot of wires all over the place, and I remember crossing the Border and the soldiers ripping the car apart because they thought I was on some sort of reconnaissance mission.”

For Bill, Brexit has “definitely brought the Border back to the forefront [of people’s minds].

“You hear people saying it’s put a united Ireland back on to the agenda but I don’t know if that’s even true. I think the politicians have one idea of how life’s going, but most people just want to live their lives as they’ve always lived them.”

In the 3½ years, the word “uncertainty” has been oft-repeated on the Border. As the UK’s departure from the EU approaches, that uncertainty is perhaps less sharply-felt; still lacking, however, is certainty.

“I definitely wouldn’t be relaxed,” says Bill. “I think there still could be huge problems ahead. We’re a net importer into Ireland, so our position’s probably a bit more straightforward.

“In a year’s time, everyone will have a better idea.”

The UK will leave the EU on Friday; on Saturday morning the Johnsons say “we won’t be celebrating or commiserating. It’ll just be the same as ever”.