August occupancy may be as low as 17% in the capital, but better in rural areas 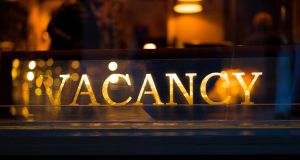 This year’s drop in room occupancy was the largest ever recorded with some smaller, independent hotels in the capital facing ruin, according to sources. Photograph: iStock

Dublin hotels are faring worst in the Covid-19 crisis in the hotel industry, with room occupancy rates for July at just 17 per cent of what they were last year.

Many hoteliers say they are now facing ruin as national figures show advance bookings for August are down by more than 50 per cent.

Average occupancy of hotel rooms across the State was 42 per cent for the month just ending, compared with room take-up of 90 per cent in July last year.

The situation is particularly serious in Dublin where numerous new hotels are due to open later this year.

Advance bookings for September show the situation worsening with an anticipated take-up of hotel rooms of just 24 per cent.

The Irish Hotels Federation said the tourism industry created more than 90,000 new jobs between 2011 and early 2020, leading the economic recovery after the economic crash a decade ago.

Before the Covid-19 crisis the industry supported more than 260,000 jobs, equivalent to 11 per cent of total employment in Ireland, with more than 60,000 of these jobs in the hotel sector alone.

Irish Hotels Federation president Elaina Fitzgerald Kane said the Government stimulus package measures “fail to deliver the required supports around competitiveness and liquidity” which would allow the sector to once again add thousands of jobs.

“It is very disappointing and could have long-term consequences for tourism and the almost 270,000 livelihoods it supports,” she said.

According to the latest industry survey conducted by the federation, “enormous challenges” face hoteliers and guesthouse owners as demand plummets.

This year’s drop in room occupancy was the largest ever recorded with some smaller, independent hotels in the capital facing ruin, according to sources.

Bookings for August are broadly in line with those in July while bookings for September show an even deeper drop in occupancy levels.

According to the CSO, the number of overseas visitors to Ireland has dropped by 97 per cent this year.

A breakdown of occupancy results for July 2020 shows occupancy rates of:

Dublin city and county: 17 per cent

Other cities: 41 per cent

“Even in a best-case scenario, we are effectively looking at occupancy levels of less than 30 per cent for the year as a whole. This is nothing short of disastrous for our sector with serious implications for the tourism industry and wider economy.”

The key elements the sector wants addressed are an increase in the level of assistance required to support employee retention and a further reduction in the VAT rate.

“Tourism businesses also maintain that the rates waiver, which is due to lapse in September, does not go far enough. The waiver must be extended further to coincide with business interruption for a minimum of 12 months,” she said.

“Time and again, tourism has proven itself as a hugely successful engine for economic growth, particularly in regional Ireland. Last year alone it generated more than €9 billion in revenue, she said.