Anglo’s dealings with Department of Finance seem curiouser and curiouser

Draft letter fully answered queries while final letter did not 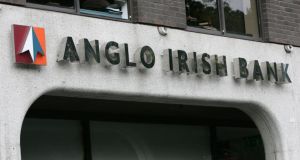 Change “was made on foot of an internal review by Anglo Irish Bank”. Photograph: Frank Miller

In the application made by the family of Seán Quinn last week to have the Department of Finance and the Central Bank joined as co-defendants in the case they are talking against IBRC (formerly Anglo Irish Bank), some of the documents opened in court were from the period in early 2009 just after the nationalisation of Anglo. Among these were the following (the Ann Nolan referred to was and is a senior department official:
(i) A draft letter from Donal O’Connor, then chairman of Anglo, to then minister for finance Brian Lenihan, dated February 3rd, 2009, in response to a formal request from Lenihan on January 28th, 2009, to O’Connor to provide immediate and full clarification on the extent of lending by Anglo for the purposes of all share acquisitions and all contracts for difference (CFDs); (ii) minutes of a meeting at the department on February 3rd, 2009, attended by Nolan, and two others from the Department of Finance; O’Connor, Fiachre O’Neill and Natasha Mercer, all of Anglo; and Pádraig Ó Ríordáin and two others of Arthur Cox solicitors; (iii) the formal letter of response to Lenihan from O’Connor of February 4th, 2009.

The draft letter of February 3rd, 2009, contains the following sentence: “As requested, I enclose a report on the extent of lending for the purposes of share acquisitions and contracts for difference generally and Anglo shares in particular.” This seemed to be precisely what Lenihan had requested in his letter of January 28th.

The minutes of the meeting of the same day have the following references:
(a) “Lending Against Bank’s Shares: DO’C [Donal O’Connor] provided a draft of the letter which is proposed will be sent to the Minister tomorrow in response to his letter received late last week. AN [Ann Nolan] agreed to read the letter and revert with any comments.”
(b) “Summary actions: AN [Ann Nolan] to read draft letter from the Bank to the Minister re loans against equities and revert with comments.”

The letter from O’Connor dated February 4th, 2009, does not contain the sentence stated above: “As requested, I enclose a report on the extent of lending for the purposes of share acquisitions and contracts for difference generally and Anglo shares in particular.” Instead it has the following: “We [ie Anglo] do not lend for the purpose of taking positions in contracts for difference.”

Potentially misleading
That statement may have been technically correct but was potentially misleading. It failed to answer the question posed by Lenihan on January 28th asking for “full clarification on the extent of lending by Anglo for the purposes of all share acquisitions and all contracts for difference”.

However, it seems the draft letter responding fully to Lenihan’s query was given to Nolan on the previous day and she was asked to comment on the draft, following which it was changed substantially in a way that avoided part of Lenihan’s query.

I put a series of questions to the Department of Finance about this on Monday and received a reply yesterday.

The reply contained the following: “Prior to the date of the meeting or of the letters the Department was aware of this type of lending [in relation to CFDs] and the issue was referred to the Office of the Director of Corporate Enforcement for investigation, the request was now being made so the Department and the Minister were in receipt of the full facts on the matter. No difficulty would have arisen from the perspective of the Department had that line remained in the final form of the letter. As the substance of the difference in the two letters was the issue referred to the Director of Corporate Enforcement by the Minister, conducting a separate inquiry into the change in the letter by the Department would not have been appropriate [this was in response to a query from me on whether the Department then had instituted an inquiry into how and why the letter had been changed].”

The response went on to deny that the Department of Finance rewrote the response to its own query or indeed suggested the removal of a reference to lending for CFDs.

It stated: “There are many potential reasons why the alteration between the draft and the final letter might have been made, presumably the change was made on foot of an internal review by Anglo Irish Bank. The essence of the difference between a draft and a final letter is that a draft remains unfinished and is subject to changes, corrections or additions. I would further add that it is perfectly normal for the bank to discuss a draft response to a formal request for information from the Minister for Finance with officials of the Department, the consultation is to ensure that the response prepared by the bank fully meets the requirements of the Minister prior to finalisation. There is nothing to suggest that the discussion referred to in the minutes of the meeting disclosed in Court last week that suggests that this consultation was any different.”

But the draft fully answered the minister’s queries, whereas the final letter didn’t. Curiouser and curiouser.

1 Ireland could lose out as France lays claim to most of €5bn Brexit compensation fund
2 Q&A: What restrictions are going to be lifted next week?
3 Cross-Border restrictions unlikely as Ministers meet to discuss lockdown exit
4 Miriam Lord: The Dáil's answer to John Wayne overcooks the ham slice, by slice, by slice
5 400 – yes, 400! – Irish retailers for all your online Christmas shopping
Real news has value SUBSCRIBE