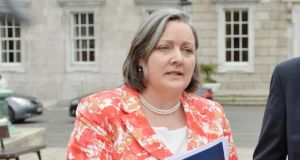 Intensive drinks industry lobbying has been successful in delaying public health on alcohol, according to former minister of state for health Marcella Corcoran Kennedy.

The former minister of state, who lost her job in the reshuffle, said all Oireachtas members had been lobbied directly again and she believed the drinks industry was attempting to unpick the Public Health (Alcohol) Bill, “bit by bit”.

Ms Corcoran Kennedy said she was “absolutely disappointed” at the further postponing of the legislation until the autumn, which has twice been affected by issues around the Fine Gael leadership.

Taoiseach Leo Varadkar confirmed this week it would not be possible to complete the Bill’s passage through the Oireachtas before the summer recess.

But he said it was “intended to have it enacted through both the Dáil and Seanad in the next session”.

Mr Varadkar, who as minister for health first introduced the legislation in the Seanad where it passed second or introductory stage in December 2015, said he strongly supported the legislation.

Ms Corcoran Kennedy, who had responsibility for piloting the Bill through the Oireachtas following the 2016 general election, said it was stalled in the Seanad in October last year because it got caught up in the leadership issue, when some rebel TDs and Senators called for then taoiseach Enda Kenny to announce his departure from office.

It was stalled again in May when it was decided there was no point in attempting to get it through the Seanad when the leadership contest was under way.

Officials originally assigned to the legislation had been transferred over time but a senior official who had been involved in the legislation from the outset was appointed for its anticipated return to the Seanad in early July.

An amendment had been drafted to deal with opposition early on to initial proposals on the segregation of alcohol from other products in supermarkets and other shops. “I felt we had addressed everything,” the Offaly-based TD said.

Compromise had earlier been made on sponsorship and the proposals in the legislation were completely different to the stronger initiatives originally planned.

“The alcohol industry is attempting to unpick the legislation bit by bit,” she said adding that it was “utterly frustrating”.

Social Democrats TD Róisín Shortall who asked in the Dáil about the Bill’s progress said it had moved at a snail’s pace and in the 18 months since its inception “there have been 1,600 alcohol-related deaths. Approximately 800,000 bed-nights have been taken up in hospitals as a result of alcohol-related illnesses, and there have 420,000 absenteeism days as a result of alcohol abuse.”