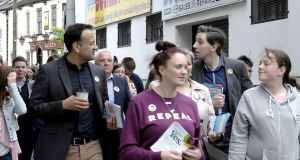 The divorce referendum was Leo Varadkar’s first foray into political campaigning. It was 1995 and he was an eager 16-year-old who had dreams of being Taoiseach.

It was, of course, the marriage equality referendum in 2016 where he made his most significant political contribution. He remembers both campaigns vividly.

In 1995, he says, opponents of divorce warned Ireland would develop the “same divorce rates as Britain”.

People came over from Australia to say “what you see on Summer Bay (where television drama Home and Away is set) is not what Australia is really like and that we would all be living with foster families in caravan parks”.

Fast forward to 2016: he says those opposing the introduction of marriage equality claimed there would be “an explosion in surrogacy and same-sex couples would be going to have children through surrogacy”.

“We had all that scaremongering before and it did not turn out to be true,” Varadkar tells The Irish Times.

It was the nature of a referendum campaign, he says, to invent “new scares” to frighten people away from social change.

This time around those opposing the repeal of the amendment have made a number of claims. They have alleged abortions would be accessible in Ireland on the grounds of a disability, or that the proposal would lead to Ireland developing a British-style abortion regime if the Eighth Amendment to the Constitution is removed.

“People say what we are proposing in Ireland is more liberal in the UK or the same as the UK. It is not,” the Taoiseach says. “Any kind of abnormality, not even a fatal one, is grounds to end a pregnancy in the UK. That is not going to happen here.”

He is also quick to clear up claims that allowing for terminations when there is a risk of serious harm to the health of a mother will lead to abuse of the legislation. Serious harm to a woman’s health, he says, refers to cancer, diabetes and epilepsy.

Varadkar says the amendment prevents Ireland from offering “the full suite of healthcare options that would be available in almost every country in Europe”.

This week’s referendum is not a new debate. The future of the Eighth Amendment is a conversation that began not long after it was introduced in 1983 and has never been far from the airwaves or the headlines since.

There are plenty of people, Varadkar says, who are arguing for something more restrictive than the Government’s proposals to allow for access to terminations within the first 12 weeks of pregnancy.

“I have yet to see them come with a new wording or an alternative. . . If there was an alternative wording [that] we could put into our Constitution, why has nobody produced it? And secondly, would those people who are voting No support that? My sense is that people who are campaigning for a No vote would be against any proposal.”

That may be so but perhaps it would have been an easier campaign for the Government if it had proposed terminations in exceptional circumstances. That is an argument he has heard many people make, but Varadkar does not accept that.

“In the instance of rape, you would need some sort of process by which the authorities would adjudicate if the woman was raped or not. Take Poland, for example, a woman would have to go the prosecutor’s office, the equivalent of our DPP would be adjudicating on something like that. It is when you think through how you do that. It is not easier.

“Incest, for example: you would probably need to carry out some sort of a test – maybe an amniocentesis and you would need samples from the father. On the face of it, it might have seemed like an easier proposal but how you would try to legislate for that, it would have raised even more questions and more doubts than we have now.”

As recently as last year, Varadkar said he favoured terminations in the cases of rape, incest and fatal foetal abnormality. Rewind to 2014 and he argued against “abortion on request or demand”.

He says his position on the need to remove the amendment has always been clear but that his view on the grounds on which abortion should be accessible was a source of conflict. He and his supporters would say his position has evolved and his critics have seized upon his public tug of war with the issue.

Like most politicians, it was the cases of women who had received diagnoses of fatal foetal abnormalities that significantly altered his view on abortion.

Varadkar heard the stories of women who had travelled to Liverpool for terminations, women who had to “bring the remains of their baby back in suitcase or in some cases being sent over by FedEx or DHL”.

“It is those kinds of stories that helped me to understand we got it wrong in Ireland with the Eighth Amendment. It is too restrictive, the Constitution is no place for making laws about something as complex as abortion and something that has so many grey areas.”

Varadkar was in Tullamore, Co Offaly, on Sunday to canvass for a Yes vote in Friday’s referendum. Unfortunately for him, Tánaiste Simon Coveney and five other Cabinet members, the town was somewhat deserted.

Some were en route to Kilkenny for a hurling match, the others may have been staying indoors as the sunshine seen on Saturday was nowhere to be found.

There were a few US tourists on the streets as well as some Love Both canvassers advocating a No vote in the referendum. There was an exchange of pleasantries between Varadkar and the campaigners, and some not so pleasantries, but it was all rather civil.

This is also the first political test for Varadkar since he took over as Taoiseach. He has faced many challenges along the road but this will be the first on which the public will have their say.

He is not the bright-eyed bystander he was in the 1995 divorce referendum campaign but rather the Taoiseach he then aspired to be.