‘There is so much hurt on all sides. How can abortion be a solution?’

‘Progressive thought, defence of the meek, primacy of science – abortion falls down on all of those issues’

The Government's draft legislation on abortion allows for termination of pregnancy up to 12 weeks, but how did they come to this decision? 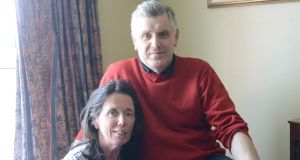 Liam Mulligan’s mother, Anne, remembers exactly how old her baby son was when he died.

Born in March 2006 with the rare but serious genetic condition Edward’s syndrome, he survived for two months, five days and 40 minutes.

“A consultant wrote a very nice letter afterwards saying how brave a boy he was,” Anne remembers.

Originally from Letterkenny, Anne and her husband, Liam Snr, were living in Dublin at the time, and were visited in hospital by other mothers who had lost children with the syndrome.

“They came in and their faces just lit up when they saw Liam, and they were so delighted to see a child who reminded them of their own child,” says Anne.

“The individual who was our son, who is our son, he lived, and even though he was just a small little person for over two months he lived a very full life and by his very condition brought loads of people in to us.

“As a result, you don’t expect it in Dublin but our neighbours showed great support, great compassion and great love.

“It really pulled a whole community together, this little person, and I wonder had that little person been opted out what would have happened.”

Liam was buried in his parents’ native Letterkenny, where his memorial stands in the same graveyard as his relatives, including two uncles who died as children.

His parents now live in the Donegal town along with his 13-year-old older sister, who has Down syndrome, and a younger brother aged nine.

Kill is such a horrible word, it’s such a nasty word, but how else do I describe taking a life before its natural end

Both the Mulligans are campaigning for a No vote in the referendum on whether to repeal the Eighth Amendment.

“They are human beings, all three of them,” says Liam Snr, “and we feel that the concept that a child is just a diagnosis and that they can be killed because of a diagnosis goes back to making a person a slave because their skin is black; that’s what it feels like to us.”

“You’re dehumanising,” adds Anne. “You’re not acknowledging the humanity is there by even giving the option that someone can choose to kill.

“Kill is such a horrible word, it’s such a nasty word, but how else do I describe taking a life before its natural end, that someone could choose to end another person’s life that is a human, maybe a small human but still nonetheless a human?”

After their daughter was born with Down syndrome, the question of pre-implantation diagnostics was raised when they were considering whether to have a second child.

“It’s an IVF process in Belgium whereby they examine the embryos and dump the ones that seem to have a genetic defect,” says Liam.

“You were the one who said to me, Anne, ‘Well, that would be dumping our daughter down the sink’.”

“It would immediately be saying she’s dumpable, she’s less than,” says Anne.

For the Mulligans, their opposition to abortion – and to the repeal of the Eighth Amendment – is based on their own reasoning and on their experience as parents.

“Progressive thought, primacy of science, transparency, the defence of the meek and the need to give a voice to the voiceless – I think we will find that abortion falls down on all of those issues,” he says.

“We know there are very painful issues for some people around pregnancy, but once you recognise the life, the fact of life not the belief of life, it becomes a different discussion,” he says.

Citing examples such as fatal foetal abnormality and pregnancies as a result of rape, Liam stresses these are problems which have to be solved, but that abortion is “distracting from actually looking at real solutions”.

The referendum has brought the Mulligans out canvassing – reluctantly – for the first time.

“My feeling is that I have to be able to stand up in front of my son and say I did my best; that children like our daughter would be protected. That’s the only thing that’s taking me out.”