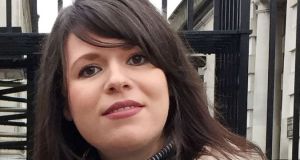 Amnesty International has called on the British government to act over Northern Ireland’s “Victorian-era abortion ban” following the referendum in the Republic.

It’s campaign manager in the North, Grainne Teggart said the British government can “no longer turn a blind eye and deny us equality”.

“We cannot be left behind in a corner of the UK and on the island of Ireland as second-class citizens,” she said.

Abortion law in Northern Ireland is covered by the Offences Against the Person Act 1861 and the Criminal Justice Act (NI) 1945.

At present access to abortion is only permitted if a woman’s life is at risk or there is a risk to her mental or physical health that is long term or permanent.

It is not permitted in cases of rape, incest or fatal foetal abnormality.

Over the decades this has resulted in women being forced to travel to Britain to access a termination while many others go online to buy abortion pills, risking prosecution for doing so.

On the expected landslide yes vote in the Republic to repeal the Eighth Amendment to the Constitution, which protects the equal right to life of the mother and the unborn, Ms Teggart, said: “The referendum result is a momentous win for women’s rights.

“This marks the beginning of a new Ireland - one that really does trust and value its women.

“It must not be forgotten that us women in Northern Ireland are still persecuted by a Victorian-era abortion ban.

“It’s hypocritical, degrading and insulting to Northern Irish women that we are forced to travel for vital healthcare services but cannot access them at home.”

In the next few months the Supreme Court in London is expected to make a ruling on a case considering whether Northern Ireland abortion law breaches women’s rights.

In addition, the case of a mother being prosecuted for buying abortion pills for her daughter will be heard in September.

Last year British Labour Party MP Stella Creasy proposed an amendment to the Queen’s Speech calling for Northern Ireland women to have access to free abortions in England, where the 1967 Abortion Act allows for abortion up to 24 weeks.

The new provision was subsequently introduced by the British government but does not go far enough, campaigners have said.

Belfast-based Alliance for Choice spokeswoman Danielle Roberts was among the reproductive rights activists to support and canvass for the repeal movement in the Republic.

She says abortion access must be made available in the North without delay.

“We are proud to have played a small part in solidarity campaigning with our friends in Ireland, and we will continue with that solidarity until it is no longer needed,” she said.

“We also gratefully acknowledge the offers we have already had, in solidarity from the South, to work towards the change that is still so urgently needed in Northern Ireland.”

DUP MLA Jim Wells said the Irish referendum decision is a grave threat to the unborn child in Northern Ireland.

“Not only has the Republic voted to allow what will be effectively abortion on demand, the size of the Yes majority will give TDs and Senators a mandate to introduce wide ranging, liberal legislation,” he said.

“It is inevitable that the abortion industry based in Great Britain will set up clinics in border towns and promote their services to Northern Ireland women. It will be much easier to terminate a child’s life if this can be done at a clinic in Dundalk or Letterkenny rather than flying to London or Manchester,” he added.

“Verified research has shown that the impediment of the Irish Sea has encouraged pregnant women to think again and as a result 100,000 lives have been saved in Northern Ireland.

“The referendum decision will mean that Northern Ireland and Malta will remain the only parts of Europe where the unborn child will have a high level of protection.

“The ray of hope is that our neighbours in Co Donegal voted to protect the unborn child,” he continued.

Mr Wells said the pro life movement must now redouble its efforts to prevent any change in law in Northern Ireland. “I remain totally pledged to all that I can to help them achieve this”.

A spokeswoman for Precious Life, the North’s main anti-abortion organisation, was not available for comment at the time of publication.