100 TDs and Senators not expected to survive election 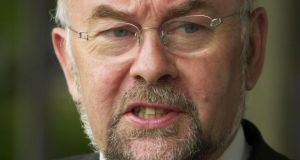 Ruairí Quinn, who along with fellow former Labour leaders Pat Rabbitte and Eamon Gilmore, will not contest the next election. Photograph: Frank Miller

One hundred TDs and Senators – or close to half the Oireachtas – are not expected to return to Leinster House after the general election, with €14 million already set aside to cover their pension and associated costs.

The projected number of Oireachtas members expected to go into retirement – willingly or unwillingly – is based on the turnover following the watershed 2011 election when the Fianna Fáil/Green Party Coalition experienced an unprecedented rout.

A spokesman for the Oireachtas confirmed an estimated figure of €14.325 million had been included for pension costs in the 2016 Statement of Estimates for the Houses of the Oireachtas Service.

Civil servants drew up the estimates. Dáil and Seanad elections must take place by early April 2016. The Oireachtas is comprised of 166 TDs and 60 Senators.

The 2011 general election resulted in an exceptional transformation of the political scene, with Fianna Fáil losing 58 seats and the Green Party, which had shared power with it , losing all six of its Dáil seats.

Fine Gael’s Frank Feighan and Liam Twomey have declared they will not run again, as has the Socialist Party TD Joe Higgins. Seamus Kirk of Fianna Fáil and Sinn Féin’s Michael Colreavy will also step down.

TDs and Senators are entitled to receive termination payments, a pension and a lump sum when they retire or fail to get elected.

Termination payments operate in the same manner as redundancy payments to provide a “financial cushion” should an Oireachtas member lose his or her seat. The payments reflect the number of years continuous service.

Projected redundancy payments for secretarial assistants amounted to €6.125 million, while a figure for constituency office grants of €0.384 million was also included.