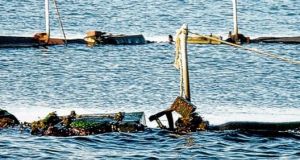 Abandoned salmon cages at Bertraghboy Bay in Connemara, where it was claimed sea trout stocks were wiped out

OPPOSITION TO FISH FARMS:A range of fisheries and tourism interests say their opposition to salmon farms is based on bad experience.

Fisheries and estate manager Simon Ashe at Ballynahinch Castle near Cashel in Connemara said the estate used to have the largest sea trout hatcheries in the country, taking 5,000 sea trout out of nearby Bertraghboy Bay and surrounding waters each year. However, following the arrival of fish farms ,“this was wiped out in three years”.

He said stocks were starting to come back since some fish farms in the bay were abandoned.

He claimed he also has a collection of photographs of sea cages half sunk or dumped on the shore.

Ashe speaks of problems associated with parasites; the denuding of sand eels from the natural habitat to feed fish in cages, leaving wild salmon without traditional feeding grounds; of chemicals used to kill fish parasites; of the effect of chemicals on local oyster beds; of problems caused by escaped fish rivalling wild fish for spawning grounds; and the impact on angling tourism.

Of the Galway Bay project, he said: “I am surprised the Minister for Agriculture hasn’t figured it out. He is probably facing a train wreck here.”

Delphi Lodge’s Michael Wade said a local project released 20,000 smolts, 10,000 of which were immunised from parasites. They went to sea “past the fish farm barrier” but the mortality rate among the non-immunised was shocking.

“The fishing community of the world is watching this. If the Bord Iascaigh Mhara project goes ahead the anglers will go to Iceland or Russia. We have a wonderful resource here, all we have to do is leave it alone.”

Enda Conneely from Inis Oírr said five tourism and angling and development interests were concerned about the farm having seen a previous farm in the area fail with serious consequences.

An Taisce said it was opposed on environmental grounds . Friends of the Irish Environment said it was concerned the board was applying to its parent department for a licence. Other bodies opposed to the farm include Salmon Watch Ireland, the Federation of Irish Salmon and Sea Trout Anglers, No Salmon Farms at Sea, Coastwatch and Save Galway Bay.