The teenage son of Kansas congressman Roger Marshall draws much confusion from Paul Ryan, the speaker of the US House of Representatives, by dabbing during a photo call at his father's swearing-in. Video: C-Span 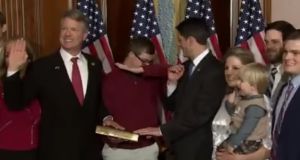 The teenage son of a Kansas congressman flummoxed the speaker of the US House of Representatives by dabbing during a photo call at his swearing-in.

Paul Ryan believed Cal Marshall, the 17-year-old son of Roger Marshall, was about to sneeze when he moved his face down to his forearm while he and his family posed for photographs at Tuesday’s swearing in.

He was in fact dabbing: a viral dance move popularised by US athletes and rappers, and embraced by teenagers as an irreverent or celebratory gesture.

“You all right?” he asks of the teenager.

“I’m all right,” Marshall replies into the crook of his elbow, mid-dab.

“Do you want – can you put your hand down?” persists Mr Ryan.

When the teenager eventually concedes, Mr Ryan asks: “Were you going to sneeze? Is that it?”

“Still don’t get what dabbing is, though.”

Mr Ryan’s misapprehension was understandable, given the dab does resemble a polite attempt to muffle a loud sneeze.

In December, a viral image of unknown origin showed the dab appropriated as a public health message not to spread germs: the acronym “Destroy All Bacteria”.

The move is believed to have originated in the hip-hop scene of Atlanta, Georgia, as long ago as 2013, but reached a tipping point in late 2015 after featuring in a number of viral videos online.

After being popularised as a celebratory gesture by US sports players, most notably the Carolina Panthers quarterback Cam Newton, and took on a new life on social media.

Hillary Clinton did the dab on Ellen in January 2016, around the same time Jesse Lingard brought the dab to Britain when he marked his goal in Manchester United’s 3-3 draw against Newcastle.

In the chronology of viral dance moves, it succeeded the Whip and the Nae Nae (both demonstrated by Clinton on Ellen) and was followed by Juju on that Beat.