One image pays tribute to celebrity deaths of 2016

David Bowie, George Michael, Terry Wogan and Frank Kelly feature among those in the montage tribute 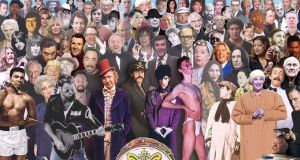 Image of celebrities that have died in 2016. Photograph: Chris Barker/Twitter

An image created by an artist as a tribute to the high number of celebrities that have died in 2016 has gone viral on social media.

British graphic designer Chris Barker created a montage inspired by the Beatles’ iconic Sgt Pepper’s Lonely Hearts Club Band album cover as a tribute to those from the music, film and sport industry who have died this year.

He has also featured references to world events including Britain’s brexit vote and Donald Trump’s presidential election win. Chocolate bar Toblerone even has a spot in the picture. 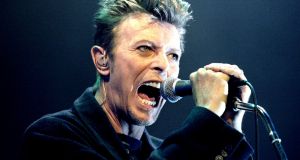 Barker created the first version on the night of the US election and first posted the image in November. He wrote in his blog: “What a year, I was thinking, David Bowie, Brexit and now this. A lot of people speculate that Bowie was actually the glue that was holding the universe together.

“It’s certainly been a bit different since he tragically passed away. So I thought that since I was going to be up for hours anyway... I might do a montage that summed up how weird a year it’s been.”

Barker said he mistakenly included musician Lemm, who died in December 2015, and that the error had been repeatedly pointed out.

“I know this now. I doubt I’ll ever forget it.The Lemmy error was actually pointed out to me within 2 minutes of making the original post, ” he said.

He has continued to update it after the death of well-known people through the year.

Barker told BBC radio this week he had done his best to be respectful to the people who had died.

“It’s kind of the big picture, as well as the details,’’ he said.

“People are just so overwhelmed by the monumental scale.”

He said he had not profited from the creation and suggested that a donation could be made to the Jo Cox Memorial Fund, the politician who was murdered in June.