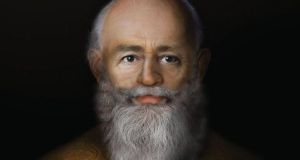 St Nicholas of Myra, said to be the inspiration for Santa Claus, as visualised after facial reconstruction by scientists in Liverpool

At last, it can be revealed what Santa Claus really looks like. Away with your Victorian or Coca Cola images. This is the real, real thing, as established by scientists at Liverpool John Moores University’s Face Lab.

They used a facial reconstruction system and 3D interactive technology to create the most realistic image ever achieved of St Nicholas of Myra, in modern southern Turkey. He is the 4th-century bishop said to be the inspiration for Santa Claus. St Nicholas lived from 270 to 343 and was known for his great if anonymous generosity to those in need.

Prof Caroline Wilkinson told The Irish Times the reconstruction was based on research done in 1957 by Italian anatomy professor Luigi Martino, as it is no longer possible to access the remains of St Nicholas at the basilica named after him in the southern Italian city of Bari.

Prof Martino did his research during restoration work at the basilica, “x-rays, measurements of the skull, that sort of thing,” said Prof Wilkinson. It established the saint was in his early 70s when he . . . er . . . ‘died’.

He was about 5ft 4in in height, average for the time, with a slender-to-average build which has since become greatly expanded. His nose shows evidence of having been broken and, as is common in people of a certain age, he had chronic arthritis in the spine and pelvis.

Prof Wilkinson and colleagues relied on “all the skeletal and historical material” from Prof Martino’s work and developed their image of St Nicholas using “the most up-to-date anatomical standards, Turkish tissue depth data and CGI techniques.”

St Nicholas’s nose, Prof Wilkinson said, had “healed asymmetrically, giving him a characteristic nose and rugged facial appearance”. The story goes that at the Council of Nicea in 325, he got into a fight with the heretic Arius and hit him, as happens at theological conferences. It would appear Arius may have hit back, breaking Nicholas’s nose.

In 1087, sailors from Bari seized St Nicholas’s remains in Myra and brought them home to what is now Italy. In 2009, the Turkish government formally asked that they be returned.

That is not all. The bones of St Nicholas are also believed to be buried, since the 12th century, at Newtown Jerpoint in Co Kilkenny. The grave’s stone slab there is carved with the image of a cleric with two knights, said to be crusaders who, the story goes, brought St Nicholas’s remains to Ireland. And it is known that Normans knights from Kilkenny took part in the Crusades.

Maybe it is why the county’s hurlers have had so many Christmases.

Other reconstructions at Liverpool John Moores University’s Face Lab of Irish interest would include Blessed Edmund Rice, founder of the Christian and Presentation Brothers, said Prof Wilkinson, as well as Clonycavan bog man for the National Museum.

The scientists were also involved recently with reconstructing the face of Robert the Bruce, the 14th century king of Scotland, and of Richard III, whose remains were found at Leicester in England, in 2012.