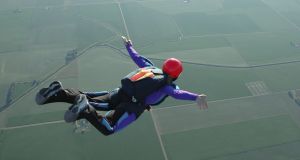 A tandem parachute passenger required lifesaving medical attention after a rare equipment malfunction lead to him and his instructor crash-landing in a forest clearing in Co Offaly last year.

An Air Accident Investigation Unit report revealed the 21-year-old man suffered a broken back, broken left arm, broken jaw, and lost a number of teeth following a “very heavy landing” near Edenderry, Co Offaly on August 18th, 2012. The instructor broke his left femur in the accident.

Tandem parachuting is a type of skydiving where a person is connected to a harness attached to a tandem master; the master guides the student through the whole jump and remains primarily responsible for the safe deployment of the main chute.

According to the report, the pair jumped from an aircraft at 10,000 feet and deployed the main chute at about 5,500 feet, which almost immediately commenced “a rapid and violent spiral to the right”.

The master, a 52-year-old male with some 30 years’ experience, told investigators that his passenger started to get “thrashed about like a rag doll” at this point.

He attempted to perform a “cut-away”, to release the main chute, but said the “centrifugal force of rotation” prevented him from doing so. He then decided to pull the reserve chute, but when it failed to fully inflate he advised his passenger to prepare for “a very hard landing”.

Watching from the ground, the club chief instructor realised a serious situation was unfolding and started to co-ordinate a rescue operation. After the pair hit the ground assistance quickly arrived on the scene and the report noted, “the overall emergency response… contributed greatly in providing immediate lifesaving medical assistance to both injured parties.”

The investigation identified a tension knot – caused when one or more lines twist and interlock – as the likely cause of the initial malfunction. The master’s failure to cut-away the main chute slowed the rate of drag speed and hindered “the extraction of the reserve chute to full deployment”.

Normal procedure following a main chute malfunction is to cut-away the chute and deploy the reserve chute. The report found it was “not possible to be definitive in determining why the expected cut-away was not achieved,” although it suggested that the rate of rotation may have disorientated the tandem master.

Among its safety recommendations, the Air Accident Investigation Unit advised that “The Irish Parachute Club, Clonbullogue, review packing technique with the packers, in particular, with regard to clearing twists from control/steering lines on a more regular basis during packing.”