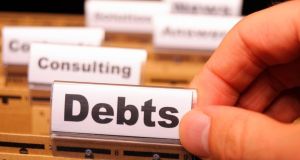 “These guidelines are draconian and far too prescriptive, and go into far too much detail as to what people can and can not spend money on,” said Fianna Fáil finance spokesman Michael McGrath


Banks dealing with people in mortgage arrears will be able to use the minimum income guidelines to be applied by the insolvency service to force distressed mortgage holders to dramatically curtail their spending on essential items such as medical care, it has been claimed.

Speaking last night, Fianna Fáil finance spokesman Michael McGrath called for the minimum income guidelines of the Insolvency Service of Ireland (ISI) to be published without delay. He said a series of leaks detailing how little money people would be allowed to live on if they entered a personal insolvency arrangement was causing fear among many distressed borrowers.

“As they are, these guidelines are draconian and far too prescriptive, and go into far too much detail as to what people can and can not spend money on. I don’t think it is possible to fit all families under this one umbrella,” he said.

He pointed out that a family with a special needs child or asthma would hit their medical spending ceiling very fast. “There are many families I know of who already only take their children to the doctor as a very last resort,” he said.

He suggested the insolvency service would be better advised setting a level of spending for different categories of household, with people given more flexibility as to how they spent their money.

‘People scared’
“The reality is that people who are looking for a debt deal will be aware they cannot live an opulent lifestyle and there will have to be guidelines,” he told The Irish Times .

“People will be very scared by what they have been reading.

“We have had a series of leaks which are not without foundation, and the aim of them is clearly to condition people into thinking that the insolvency service is not going to be a free-for-all and that there will be a very high price to pay.”

He also warned that the ISI guidelines would have a wider application than in working out insolvency arrangements “and the banks will use them when dealing with those in arrears” even if the arrears are comparatively small.

‘Fair system’
The controversial guidelines would be indicative in nature and not binding on people who found themselves in distress, the Taoiseach Enda Kenny said yesterday. He claimed his Government’s objective was to get people out of distress and not into it.

He said the Government was attempting to create a fair and equitable system that would allow people to get out of the difficulties and distress they were in, and they had made a range of decisions to create that opportunity.

“The guidelines are indicative in nature only and are not binding at the end of the day,” the Taoiseach said.

“Everybody who sits down with a lending institution or a practitioner goes through a range of what their income is and what their expenditure is.