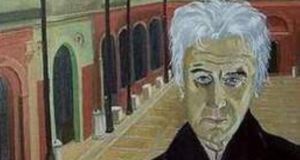 The death has taken place of the Irish-born portrait painter Reginald Gray. He was 82. He passed away from stomach cancer yesterday.

Mr Gray's portraits include those of his friend Francis Bacon, which hangs in the Portrait Gallery in London, another friend Samuel Beckett, the poet Ted Hughes, the actress Helena Bonham-Carter and Yves Saint Laurent.

He was best man to Brendan Behan when Behan got married in 1955 at a church in Donnybrook at 7.30am in the morning in front of only a few of his closest friends.

Gray was bon in Dublin in 1930 and grew up on Grove Avenue in Blackrock. His father worked in Guinness.

He attended All-Saints in Blackrock and then studied at the National College of Art. He left to study under the artist Cecil ffrench Salkeld, the father of Celia and Beatrice.

He was a member of the so-called “McDaid's set” of writers and artists who around the pubs of Dublin in the 1950s.

He moved to London in his mid-twenties and then to Paris where he has lived for the last 50 years.

In 1993 Gray had a retrospective exhibition at UNESCO Paris and in 2006, his portrait “The White Blouse” won the Sandro Botticelli Prize in Florence, Italy.

From 1993, Gray taught painting at The Irish College in Paris. In 1996, he directed and designed the setting for Letters from Ireland by Belgian playwright Philippe Alkemade, opening at The Wexford Festival and touring Ireland.

His friend, the Paris-based poet Derry O'Sullivan described him as a “very lively companion” who was really well connected with many famous people.

"He loved Paris. He was always a Paris person. He was also a fine photographer. He had such an incredible career with Bacon and Lucian Freud and Brendan Behan among many.”

He is survived by his two children from his second marriage, Terence and Deirdre, and by his companion Doina.

His funeral will take place in Paris next Friday.