Josh Begley-Taylor from Dublin was killed in Marbella on Monday 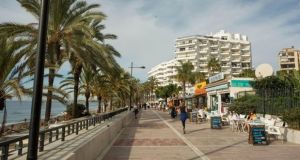 Foreign holidaymakers are few in Marbella this summer due to coronavirus travel restrictions. File photograph: Solarpix.com

An Irishman in his early 20s died when he was hit by a car while on a night out with his friends in the Costa del Sol resort of Marbella.

Josh Begley-Taylor died in the early hours of Monday after the incident in which at least one other of his friends was badly injured, suffering a broken leg.

A coachman who took the young man and his friends on a horse and carriage tour of the town just hours before his death said the group had been in great spirits and seemed like decent young men.

Foreign holidaymakers are few in Marbella this summer due to coronavirus travel restrictions.

Mr Begley-Taylor posted a video on Instagram at around midnight on Sunday of his friends taking the horse-drawn coach tour around Marbella.

It was some time after that that Mr Begley-Taylor, who was a graduate of Saint Mary’s School in Rathmines was hit by a car, sources close to the family said.

Details are still sketchy as Marbella police have not yet commented on the incident.

The Department of Foreign Affairs said it was aware of the death and that consular officials were providing assistance.

One of the drivers who took Mr Begley-Taylor and his friends on the horse-drawn coach tour said they hired two coaches for the 30-minute tour.

“It was around 9pm (on Monday) just as it was getting dark,” said José Jimenez Zamora.

“They were all behaving well and having fun. There were three men in my coach and three more men in the coach behind. There were no problems at all.”

It is not yet clear where the young men went after their tour, which includes a visit to Marbella’s picturesque old town, but at some point later that night Mr Begley-Taylor was hit by a car and died of his injuries.