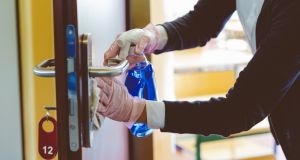 A ‘staggered return’ to schools would be better than everyone arriving back ‘in big bang theory on one day’, says Deirdre Mac Donald. Photograph: iStock

Teachers have cast doubt over whether schools will be able to reopen next month.

The Association of Secondary Teachers, Ireland (Asti) said it has a “mighty task” ahead of it to get students back within weeks.

Deirdre Mac Donald, Asti president, said on RTÉ’s Morning Ireland she was “not confident” the Government’s plan for reopening schools can be put in place within the time frame outlined.

“It is the logistics of it,” she said. “Some schools will need more changes to the school infrastructure, or maybe have to get in extra portacabins or space that is available in a nearby hall or something like that.”

Ms Mac Donald also warned that getting the 1,000 promised extra teachers, as well as panels of supply teachers in place, “is no small task either”.

Minister for Education Norma Foley said the recruits would be drawn from a “variety of pools or strands” including from 1,300 teachers who were already job-sharing in secondary schools. Limits on the number of hours a job-sharing teacher can work are to be lifted.

Schools will also be looking to more than 2,000 secondary teachers registered but not teaching “for a variety of reasons” and more than 300 teachers newly qualified and trained this year in the UK, Ms Foley said.

“I have every confidence they can be in place in time, in the next number of weeks.”

More than 1,000 additional secondary school teachers are to be hired as part of plans announced by the Government to reopen schools at the end of August.

A significant funding package of more than €375 million to support schools reopening was signed off at a Cabinet meeting on Monday.

Under the plans, extra teachers will be hired to allow some schools to split larger classes to adhere to physical distancing rules of one metre between desks.

While she expected significant numbers to be drawn from existing part-time teachers, the Asti president said few would be encouraged to come out of retirement.

Ms Mac Donald also suggested a staggered return to schools would be better than everyone arriving back “in big bang theory on one day”.

“Everyone has to get used to this new regime,” she said. “Everybody will need their day to get in, see the place, how it works — it is a very different place from September of any other year.”

Supply teachers need to be assigned to a school, rather than several schools, she added, to keep “as closed a school regime” as possible.

Ms Foley has urged smaller schools around the country to “reimagine” their space so pupils and staff can safely return under Government guidelines within weeks.

Schools should look at “general purpose areas, assembly areas and reimagine how those spaces can be used to meet the needs of classes at a given time,” she added.

“I have confidence that schools will have the potential and certainly have the financial resources to reimagine and to reconfigure spaces where required.”

On the plan to roll out piloted substitute teacher panels nationwide, Ms Foley said supply teachers on a year-long contract “will be shared among a small number of schools within a particular location”.

On concerns that supply teachers switching between schools risks spreading coronavirus, Ms Foley said: “It will be on a very, very limited basis.”

While schools have “autonomy” to meet their own needs, the Minister said they should all be open “as normal at the end of August, early September as it was in the past.”

“That latitude within a couple of days remains, but in the main what I am saying is schools will open as normal at the end of August, early September.”

Some schools may be hit with weeks-long delays in reopening, John McGowan, general secretary of Teachers Union of Ireland (TUI), has said.

While every effort will be made to adhere to the Government’s timeline for opening school gates next month or early September at the latest, it is likely “for local reasons that simply won’t be possible” for some schools, he said.

“Schools may still be in the business of getting ready to return. In those circumstances, pragmatism has to win out, the school has to be given time to get itself ready.”

Some schools may consider a staggered return of students, such as taking in first-year pupils for a short induction period, or incoming sixth years to reintegrate them, according to Mr McGowan.

“Hard and fast statements and hard and fast rules on this are unhelpful in the current circumstances,” he said.

Mr McGowan suggested schools where work is needed to allow for social distancing could suffer setbacks with delays in getting contractors.

“If schools are not made ready on the button, pragmatism has to apply, “ he added.

Mr McGowan said he would be surprised if there were weeks-long delays for most schools “but in some local circumstances that can’t be ruled out.”

On plans to hire more than 1,000 new teaching staff, Mr McGowan told RTÉ’s Today with Sarah McInerney it will be “very difficult” but he added it is “necessary”.

While part-time staff and those on job shares could have their hours upped, he suggested there were several hundred students in their second year of professional master of education qualification, who are Garda vetted and registered with the Teaching Council, who could also be targeted.

Also, those on a career break, whose plans may have gone awry because of the crisis, might be interested in returning to work.

It was “wistful and nostalgic” to suggest teachers working overseas might return to Ireland, he said, adding that those abroad were there because of pay disparity at home, saving for a home-loan deposit or because they have a permanent full-time post.