‘You are now entering Free Derry’: 50 years on 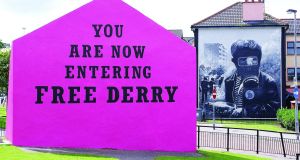 Free Derry Corner: Since 2007, the wall has been painted pink once a year to mark Foyle Pride. Photograph: courtesy of Guildhall Press

Number 33 Lecky Road was simply one of many derelict houses in Derry’s Bogside – until teenager Liam Hillen picked up a paintbrush.

In the early hours of January 5th, 1969, he scrawled the words “You are now entering Free Derry” across the house’s gable end – and Free Derry Corner was born.

The words were those of author and politician Eamonn McCann, adapted from a similar slogan used by students involved in the Free Speech Movement at the University of California in Berkeley.

Earlier that night, the police, in the aftermath of an attack on civil rights marchers at Burntollet in Co Derry and subsequent rioting, had gone on the rampage in the Bogside, breaking windows, shouting sectarian abuse, and beating anyone who resisted.

After the police left, McCann, Hillen and others decided they had to do something.

“What we were actually doing was just declaring: ‘You are now entering Free Derry, pal, and this is us, and you are not in control’,” said Hillen in a 2009 interview.

“We were metaphorically sticking two fingers up at them, saying: ‘You are not coming into our territory and beating us up whenever you feel like it.’”

“For one of the first times ever the police were away, and there was no law and order in the Bogside, at least for that night,” says McCann, who was born and bred in the area.

“I like to think of Free Derry wall as sort of representing a moment in our history, when the idea of freedom didn’t mean just having an Ireland free of British rule or influence, but when it meant something far broader and more hopeful in that it meant freedom for the world.”

Today familiar black lettering on the white background – professionally repainted by John “Caker” Casey – is instantly recognisable as symbol of resistance the world over, and adorns many a T-shirt, tea towel and fridge magnet.

Yet in Derry, and above all in the Bogside, it is not merely a historical monument, or a memorial to the struggles of the past, but a focal point for the campaigns of the present and future. On the back, it functions as a community noticeboard, highlighting social, community and political issues and events.

“In the 1960s it was about one man one vote, decent jobs, decent houses. Now we have other issues – marriage equality, other social issues and international issues.

“The issues have changed but the core cause remains the same. To me the wall still represents them and should continue to do so.”

In the past year, Free Derry Corner has turned pink to show solidarity with Derry Pride, yellow for a sarcoma awareness campaign, and sported the colours of the Palestinian flag. It has supported the anti-Brexit campaign group Derry Girls Against Borders, Organ Donation Awareness Week and, as always, remembered the dead of Bloody Sunday.

“Only for Free Derry Corner there would have been more people dead that day,” says John Kelly, whose 17-year-old brother Michael was among the 13 civilians killed after British paratroopers opened fire on an anti-internment march in January 1972.

“The organisers of the march decided to reroute it away from the William Street area, where the soldiers were, and towards Free Derry Corner, and there’s every possibility if they hadn’t done that more people would have been lying dead in the streets.

“It was also the final destination of the Bloody Sunday commemoration marches, and where the speeches were held, so on a personal level it also means a lot to me.”

Most days Kelly – who works in the Museum of Free Derry – directs tourists to the corner. They all want their photograph taken in front of the wall – though not all are impressed by its changing appearance.

“The one thing that annoys them – and it even annoys some people in Derry who think it should be untouchable – is that the wall changes.

“But the wall itself doesn’t belong to any certain individual, it belongs to the city,” he says. “After all, when you think about it, it’s only a gable wall. But it’s what’s on it that’s important.”