Man dies after falling from Cliffs of Moher while taking selfie

Man believed to have been Indian national studying in Dublin 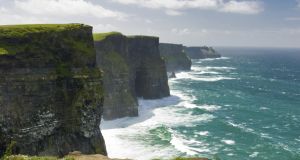 The body of the man was recovered following a search of the area Photograph: Getty/iStock

A man has died after falling from the Cliffs of Moher in Co Clare, apparently while taking a selfie.

The incident happened at around 3.15pm on Friday while the man, believed to be an Indian national studying at university in Dublin, was visiting the popular tourist attraction.

The Doolin unit of the Irish Coast Guard and the Shannon-based search and rescue helicopter Rescue 115 were mobilised to the incident after the alarm was raised.

Volunteer members from Doolin Coast Guard travelled to the scene by road while one of the units rescue boats was also launched but stood down a short time later.

The incident happened south of the main viewing areas near the visitor centre. There were hundreds of visitors enjoying the scenery and cliff walk at the time.

Rescue 115 arrived at the scene and carried out a search of the area. Once the man was located, the helicopter winchman was lowered to the water and was able to recover this body.

The man’s body was flown to Doolin where the crew was met by Coast Guard members and gardaí.

The body was transported the short distance to the local Coast Guard station where a doctor was requested to attend.

The man was formally pronounced dead at the station while a hearse arrived at 5.35pm to remove the body to University Hospital Limerick for formal identification and postmortem examination.

Gardaí interviewed a number of eye-witnesses and have confirmed that at this stage, they are treating the man’s death as an accident.

A Garda spokesman said: “There is nothing to suggest at this stage that this was anything other than a tragic accident. Initial indications are, having taken statements from a number of people, is that the victim was taking a selfie and lost his footing.”

The incident remains under investigation while gardaí were trying to make contact with the man’s family in India on Friday evening.

In June 2007, a Hungarian man in his 20s died after he fell to his death at the Cliffs of Moher while taking photographs. It’s understood that the man, who had been visiting friends in Ireland for the summer, was taking photos at the time.

The Cliffs of Moher Coast Walk was officially opened in 2013 and has proven to be a massive attraction in Co Clare.

Public warnings have been issued several times since the amenity opened. Visitors have been warned of the dangers of straying from the official walking trail while in recent years, warnings about unstable edges and rock falls have also been issued.