Yellow rainfall warning issued for all of Ireland 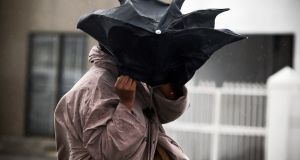 A status yellow rainfall warning has been issued for the whole country.

Met Éireann warns heavy bands of rain will cross the country from Sunday night through to Tuesday evening.

The forecaster says there is a chance of spot flooding in some areas with a heightened risk of flash flooding in mountainous regions.

The warning is valid from midnight on Sunday until 7pm on Tuesday.

In an advisory on its website Met Éireann also cautions that strong winds will lead to a greater risk of coastal flooding.

The UK Met Office has also issued a status yellow rain warning for counties Armagh, Down, Fermanagh, Tyrone and Derry which will be in place until 3am on Tuesday.

Temperatures are expected to reach highs of between 12 and 14 degrees on Monday.