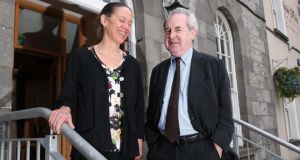 If WB Yeats was around today he would use YouTube and Twitter, the director of the International Yeats Summer School in Sligo suggested yesterday.

Prof Margaret Mills Harper from the University of Limerick said Yeats’s BBC broadcasts had underlined his awareness of the great potential of the medium of radio to bring people together and to influence culture. “He would be all over YouTube and Twitter,” she said.

Prof Harper believes more scrutiny is needed of the link between Yeats’s growing reputation after the second World War and the BBC broadcasts recorded between 1931 and 1937.

The poet’s distinctive radio tone, described by Seamus Heaney as an “elevated chant”, while not in the Justin Bieber league, has a respectable YouTube following.

Explaining his approach to radio, Yeats once said: “I speak quietly, with confidence, as if I were addressing my wife.”

In which case those attending the summer school yesterday got a taste of the conversational tones in the Yeats household, when Emilie Morin from the University of York played a number of the BBC recordings to illustrate the poet’s “intuitive command of the medium”.

She believes Yeats was one of the first of the major poets to grasp the opportunities of radio and would have been keen to exploit the benefits of modern media.

Whatever the impact of the media, Joe Cox, president of the Yeats Society, pointed out that students from 16 countries are attending this year’s summer school, including a Japanese university lecturer who attends each year. People also come from Korea, India and Brazil. Indeed, the recently launched international Yeats Society is a response to the demand from Yeats scholars around the globe for improved communication.

“I was at Yeats Day in Japan in June – over 200 people turned up,” said Prof Harper.

A feature of this year’s school is that local people and tourists are popping in to one-off lectures and events alongside the students who have committed to two weeks of more ambitious study of everything from “the iconography of Byzantium” (lecturer Warwick Gould) to Yeats’s “dialogic poetics: philosophy, prayer and the news” (Jahan Ramazani).

Mr Cox stressed that the launch of the Tread Softly festival alongside the school had meant that all ages and academic levels were catered for. “Some people come to listen to Seamus Heaney and Helen Vendler, others to see how musicians are interpreting the work,” he said.

Novelist John Banville packed the Methodist church in Wine Street last night for his reading, while across town, in the Shoot the Crows pub, Rick Epping, Brian McDonagh and Philip Duffy led a session of traditional music.

Tonight in the Hawk’s Well theatre local artists and musicians will interpret the work of Yeats for the Perfect Beauty performance. One of the highlights will be Fidget Feet’s take on Yeats’s poem The Second Coming, billed as “an exhilarating collision of traditional Irish music and dance with aerial circus and theatre”. “A terrible beauty” may be in store .