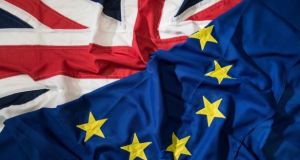 More than half of all Irish beef is exported to the UK at present. Photograph: Getty Images

The World Trade Organisation (WTO) has said that there is nothing in its rules that would force either the EU or UK to erect a hard Irish border after Brexit.

The Geneva-based trade body where countries negotiate the rules of international trade would only intervene in a dispute over trade if one of its 164 member countries made a complaint.

One expert warned that it would fall either to the UK or EU - not the WTO - to set up border checks in order to protect the integrity of their internal markets from illegal activity and divergent trade rules.

Political divisions in London over the draft Brexit agreement have increased the prospect of the UK crashing out of the EU with no deal next March.

Should the UK leave the EU next year without any withdrawal agreement, then the WTO trade rules would automatically apply to UK trade with the EU and other countries which with the EU has agreements.

This could result in tariff of more than 35 per cent on Irish dairy products exported into the UK.

The UK, the EU and the Irish Government insist they have no intention of putting up a hard border between the Republic and Northern Ireland, but a no deal Brexit would create a vacuum of uncertainty around how different trading rules would be policed along a frontier between two different economic blocs.

“There is nothing in WTO rules that forces anyone to put up border posts,” said WTO spokesman Keith Rockwell on a visit to Dublin last week.

“Someone has to bring a complaint and say that their interests have been hurt.”

The Geneva organisation insisted that it would not impose checks along the Irish border.

“The WTO will not intervene unless one of its members brought a case,” said Mr Rockwell. “If they [the UK] do not apply any duties or customs procedures against other trading partners and they do not have a trade agreement, some people might not be happy about that and they can bring a dispute settlement case.”

In circumstances where duties or customs are not enforced, a major beef producer such as the US or Argentina could lodge a complaint if the UK decided to import Irish beef duty free to avoid a customs border.

Mr Rockwell dismissed any expectation that the Geneva-based trade referee had the enforcement powers to bring about a hard border, saying the “black helicopters of the WTO will not descend”.

“Will the WTO send its agents here to inspect? We do not have agents; there are 650 people in the WTO secretariat,” he said.

Edgar Morgenroth, professor of economics at Dublin City University, said the WTO’s position on the Irish Border was “utterly irrelevant” as, in the absence of a deal, the onus would be on the EU and UK to protect their own respective markets against smuggling or divergent rules on the opposite side of a border.

“The WTO rules are neither here nor there. They don’t require you to protect your border,” said Prof Morgenroth.

“What does require you to protect your border is protecting the integrity of your single market; it needs to be preserved. Ireland would be required by EU law to do so and it is in Ireland’s interests to do that. Ultimately, it is about protecting jobs.”

He used the example where the UK might agree a deal with Brazil resulting in Irish beef farmers being confronted with tariff-free Brazilian beef imports to the UK across the Border in Northern Ireland.

“That beef could easily go across the Border without checks, you have an incentive to do so,” he said.

Prof Morgenroth used this as an example too about why technological solutions, which the UK government is keen to examine, will not solve the Border issue either as “you cannot look into trucks”.

At present, more than half of all Irish beef is exported to the UK.

“I can’t see a tractable solution to the border issue if the UK wants to deviate sufficiently strongly from the status quo,” said the DCU academic.