WRC chief rules out a return to 1970s-style industrial action 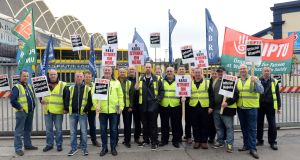 Dublin Bus workers on the picket line at Donnybrook bus depot. WRC director general Oonagh Buckley said while there had been “an uptick in the levels of industrial action”, this was coming from “an extraordinarily low base”. Photograph: Eric Luke.

People should not be frightened that the country is going back to a 1970s-style era of strikes, the new head of the Workplace Relations Commission has said.

Oonagh Buckley, who succeeded Kieran Mulvey in the post earlier this month, said what is now being experienced is a return to normal levels of industrial relations activity.

In the wake of strikes at Luas and Dublin Bus, and more threatened at Bus Éireann, in schools and elsewhere, there have been concerns raised that the country is returning to a period of widespread industrial action.

However, Ms Buckley said, while it was certainly true that there had been “an uptick in the levels of industrial action” in recent months, this was coming from “an extraordinarily low base”.

She said the scale of industrial action today in Ireland was still relatively low compared to other European countries.

She said a lot of credit had to go to employees who put up with a lot of pain, whether through wages being cut or maintained at nominal levels, and the pragmatic approach of both management and unions to ensure that jobs were maintained in the economy.

Ms Buckley said that undoubtedly as the economy improved the issue of pay progression was going to arise.

She said it was not unexpected that there was going to be some agitation.

“It is not unexpected and people should not get too frightened that we are going back to a 1970s style.

“We are going back to a more normal level of industrial relations activity.”

Ms Buckley, who previously was a senior official in the Department of Public Expenditure and Reform, was one of the key figures in the negotiations of the three public service pay and productivity agreements following the economic crash: the Croke Park, Haddington Road and Lansdowne Road accords.

She said if those deals had not been agreed there would undoubtedly have been more strikes in the public service.

However, there have been some complaints raised about the operation of the new Workplace Relations Commission, particularly by some in the legal profession.

Ms Buckley acknowledged that there were some legitimate complaints in relation to some processes and procedures.

However, on the other hand, the process of dealing with complaints has been considerably speeded up.

She said the WRC had been conducting a series of stakeholder meetings and that it “was very clear some aspects of way we carry out our procedures that are not working for the people who use our services”.

“A big one is the number of adjournments that are being sought and granted by WRC and the way we communicate around those adjournments. We are listening to those criticisms and we are working to address them.”

Ms Buckley said prior to the amalgamation last year, many people agreed that the previous system did not work.