Woman’s car hit other vehicle before fatal crash in Dublin 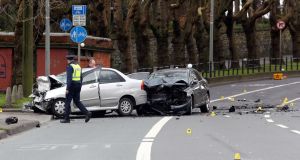 The scene of the crash on Drumcondra Road Lower. Photograph: Collins

A man and a woman have died following a car crash in Dublin on Friday morning.

Gardaí said the man (70s) and a woman (34) were sole occupants of the vehicles involved in a collision on the Drumcondra Road Lower at about 6.30am.

A Garda source said it is understood the woman was travelling at speed while driving out of the city centre. Her car hit at least one other vehicle before the fatal impact.

The woman, who had two children and three step-children, was from the north inner city.

Independent councillor Christy Burke said: “It is tragic, my deepest sympathies goes out to both families. I was speaking to constituents earlier and they described the woman as a beautiful girl.

“The community is devastated and numb. There is a very dark cloud hanging over the community this afternoon.”

A technical examination took place and the road was closed in both directions for a number of hours.

The bodies of the man and woman were removed to the Dublin city mortuary at Whitehall, where postmortem examinations will take place.

Gardaí have appealed for motorists with dashcams or anyone who may have been travelling on the road between 5.45am and 6.15am to contact Mountjoy Garda station (016668600), the Garda confidential line (1800-666-111) or any Garda station.