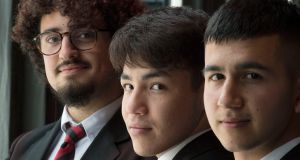 Three years ago Samir Faizi, Mohammed Almassry and Osman Noori barely spoke English. On Thursday all three students stood on stage at Croke Park and described to an audience of more than 200 people the journeys that brought them from their war-torn home countries to Ireland.

“We did it to give people an understanding of what it’s like for refugees,” says Osman, who turns 18 in a few weeks. He was 14 when he arrived in Ireland from Afghanistan in 2016 with his older brother. “I wanted to stand up there and make it clear to be more friendly to people from other countries.”

“It’s an important thing to take the experience of one person and spread it to others,” says Mohammed, who left Syria when he was 15 and travelled alone to Dublin. “It was a really horrible experience and I wish no one else goes through it. But I also want people to understand that bad things happen and we need to help each other.”

Samir also came to Ireland aged 15 – in his case from Afghanistan. “If something big happened in the UK or Ireland and people were killed it would be huge news over weeks and weeks, but what about Syria and Afghanistan?” he asks. “Every day people are killed in these places but who cares? We are human as well. Everyone is human. There is no difference between us. Young people can change the future so they should know what’s going on in different countries.”

The three sixth-year students from CBS Westland Row school in Dublin’s city centre were invited as part of the Edmund Rice Schools “Walk in my Shoes” event to share their experiences with their peers to help build a more welcoming, understanding school environment for teenagers seeking asylum, particularly those living in direct provision. Samir and Osman both reflected on the loneliness they felt during the time they spent in direct provision before receiving refugee status.

“I spent two years living in a hostel – it was tough,” says Osman. “I was also helping my brother with English, going to appointments, and at the same time I had to catch up with my studies. I couldn’t make my own space to study – it was difficult.”

Mohammed, who was recently reunited with his mother and sister, initially struggled with the fear of being alone. “I felt destroyed, really – I felt like nothing was worth it. But when my family got here I felt great.

“In Syria I used to hate school but school here had a really different atmosphere. It’s not just about education – they ask about our mental health and how we’re doing. They don’t put pressure on us that we can’t handle. They’re very caring. I really love that about school.”

Osman, who hopes to study biomedical science at university, says school has become “like a family”. “They accept us, they are very open to us. They don’t care about your nationality. Whenever we are upset, they ask is everything okay. It’s all about the humanity; they’ve really impacted on my life.”

Gerry Bennett, chief executive of the Edmund Rice Schools Trust which represents 96 schools across Ireland, said he hoped the students attending Thursday’s event could bring the boys’ messages of inclusion and acceptance back home to their classmates.

“The hallmarks for our schools are care, especially for those who are disadvantaged or vulnerable, and action for social justice and ecological justice,” Mr Bennett said. “They’ll bring the ideas back to their own schools which become the template for their student councils.”