Woman rescued from ledge 182m above sea in Co Clare 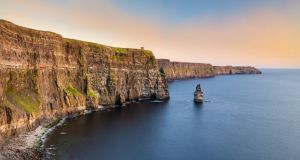 The Shannon based search and rescue helicopter, Rescue 115, was tasked to the incident and landed close to the scene at the Cliffs of Moher. Photograph: iStock

An South African tourist is recovering in hospital after she fell 13 feet onto a narrow ledge 182m above the sea at the Cliffs of Moher in Co Clare on Sunday.

The woman in her 20s was walking along the cliff trail with a friend at Aill Na Searrach at around 4.30pm when she lost her footing and fell onto a ledge about 4m below. The woman’s friend quickly raised the alarm.

The injured woman was left lying on a ledge just feet from the edge of the cliff just north of O’Brien’s Tower and the main viewing area at the popular Cliffs of Moher. The ledge is estimated to have been about 2.4m wide by 4.5m in length.

The Irish Coast Guard was alerted and watch officers at the service’s marine rescue sub centre on Valentia Island mounted and co-ordinated a rescue operation. Members of the Doolin unit of the Coast Guard responded to the scene along with National Ambulance Service paramedics.

Coast Guard volunteers set up specialist climbing equipment so that members could abseil down to secure and treat the casualty.

The Shannon based search and rescue helicopter, Rescue 115, was also tasked to the incident and landed close to the scene. The helicopter crew were unable to airlift the woman initially because of concerns that the strong downwash from the rotors would prove too dangerous.

A Coast Guard member and the helicopter’s winchman/paramedics climbed down to the woman and administered first aid before securing her to a stretcher. Once this part of the rescue operation had been carried out, the helicopter was then able to move into position and airlift the woman from the ledge.

The helicopter crew landed in a nearby field so that the woman could be further assessed and transferred to the helicopter’s stretcher. She was then flown to University Hospital Galway for treatment.

A Coast Guard spokesman said: “This was a very technical operation and had to be planned and handled with care. When we realised this was a person on a ledge rather than on the cliff trail itself, we requested assistance from the helicopter.

“We had to consider how the downwash from the helicopter might affect the rescue attempt so it was decided the helicopter would land nearby. We set up our climbing equipment and the helicopter winchman/paramedic abseiled down to the ledge with a Coast Guard member and secured the casualty. Only then did the helicopter move into place to lift her from the ledge. It was a complex rescue all the services worked very well together,” he added.

Coronavirus: 358 new cases and 18 further deaths reported in the State 17:54
Youth who defiled girl seeks release before being moved to adult prison 17:38
Dublin man pleads not guilty to murder but guilty to manslaughter 17:27
Enhanced fines of €2k for non-essential travel only came into effect on Monday 17:20
Man accused of rape says woman seeking asylum made allegations to stay in State 17:20

1 Coronavirus: 358 new cases and 18 further deaths reported in the State

5 Exemption of vaccinated people from mandatory hotel quarantine being considered