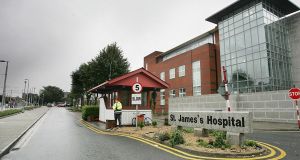 The largest number of patient delays occurred at St James’s Hospital in Dublin, above, with 59 followed by the Mater where 52 patients stayed in hospital longer than necessary. Photograph: Brenda Fitzsimons

Almost 600 patients were delayed in being discharged from public and voluntary hospitals in June, resulting in the loss of close to 19,000 bed days, according to figures released by the HSE.

The HSE assistant national director of acute services said there were 599 delayed discharges from some 37 hospitals across the State, with a total of 18,662 bed days lost. Each bed day represents a 24-hour hospital stay for a patient.

The largest number of patient delays occurred at St James’s Hospital in Dublin with 59 followed by the Mater where 52 patients stayed in hospital longer than necessary.

Forty-six patients were delayed at Our Lady of Lourdes Hospital in Drogheda, 40 in Beaumont hospital, 34 in St Vincent’s hospital, 38 at Cork University Hospital, 29 at Wexford General Hospital and 26 at Tallaght Hospital.

Waterford TD Mary Butler, the party’s spokeswoman on older people, said many of the delayed discharges were “due to a lack of home-help hours, home-care packages or community-based respite support in nursing homes or rehabilitative centres”.

Delayed discharges are discharges that did not take place even though a patient was well enough to be discharged from the hospital by their doctor and Ms Butler said it was “crystal clear that every one of the promised extra 800,000 hours of home help must be delivered in 2019”.

A spokesman for Minister of State Jim Daly said he was satisfied that the 800,000 additional hours will be delivered this year.

He confirmed Mr Daly will on Monday meet the HSE senior management committee established to implement recommendations in the 2018 delayed discharges report. The committee is to provide the Minister with an action plan by September and the meeting is part of ongoing efforts to deliver “clear workable solutions” to the problem.

Ms Butler said the HSE was not meeting its target to provide home help to 53,000 people. The actual number receiving care was 52,382, 618 fewer than it committed to.

“This deficit is not too far removed from the number of delayed discharges in our hospitals. Similarly, if the levels of home help and support that we saw in the first five months of this year continue then we will come in some 400,000 hours short of what was promised by the HSE this year.

“It is essential that home-help targets are met. Older people want to be in their own homes and not to be stuck in hospitals which are already facing serious overcrowding pressures.”