With Rockall at risk, Donegal fishermen face being ‘wiped out’

‘If we lost it there’s no real substitute’: Livelihoods ‘threatened’ in political storm 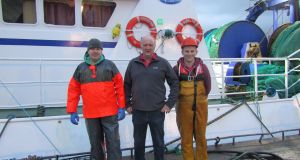 Fishing has been in the McClenaghan family for generations. Adrian McClenaghan’s grandfather was a fisherman, so too was his father; his two sons are now following him into the family business.

The skipper of the Northern Celt, which fishes out of Greencastle, Co Donegal, McClenaghan’s boat was one of three from the village who have spent the last 10 days fishing off Rockall.

He was on the fishing grounds when the manager of the local fishermen’s co-operative contacted him to tell him that a dispute had broken out: “He said, ‘the Scotch are coming to arrest you, you have to get out’.”

An isolated Atlantic outcrop 418km (260 miles) west of the Co Donegal coast, Rockall has historically been at the centre of disputes involving Ireland, Scotland, Denmark and Iceland.

On Friday the Scottish external affairs minister warned the Irish Government that it would send fisheries patrol boats to board Irish vessels if they refused to leave a 12-mile zone around Rockall.

The Irish Government contests the Scottish claim to Rockall, and its claim of exclusive fishing rights; the Tánaiste and Minister for Foreign Affairs, Simon Coveney, has said the waters around Rockall are “an EU fisheries ground”.

In the summer, dawn arrives early on the Donegal coast; the first glimmers of light were already breaking through as McClenagan’s boat arrived home just before four on Thursday morning.

The crew immediately sets to work unloading its cargo. It will take three hours to unload the boxes of haddock, squid and megrim sole. In the warehouse, huge sharp-toothed monkfish lie in packed in ice, ready to go to auction. The catch brought home by a single boat like the Northern Celt is worth 10s of thousands of euro; 30 per cent of McClenaghan’s fish come from Rockall.

“There are six boats out of Greencastle, and they’re all reliant on Rockall in the same way as I am.

“I’ve been told the Scotch are going to put me out [of Rockall], but at the end of the day I have a decision to make. If I leave, I’m out of fishing forever.

“If I couldn’t fish what else could I do? I know nothing else.”

McClenaghan has been fishing around Rockall for almost 20 years. He points to the warehouse on Greencastle pier which is being filled with the unloaded fish. “Imagine you’re out in the middle of the sea, you’re 250 miles off land, and you’ve a rock sticking up the size of that co-op.

“It’s just a rock, that’s all it is, and there’s just water everywhere else around you.”

His vessel has been boarded and inspected “regularly” by Scottish fishery patrol boats – within the 12-mile exclusion zone – and “there was never an issue”.

He and other fishermen from Greencastle decided to finish out their trips to Rockall. “Our fishermen feel they’ve a legal right to fish on those grounds and that’s what they intend to do,” said John D O’Kane, the general manager of the Greencastle-based Foyle Fishermen’s Co-Operative.

McClenaghan’s boat will head back out to Rockall in less than 24 hours; his brother, nephew and sons all work in the fishing industry.

“Hopefully the Irish Government will come to a good resolution in this whole thing but they must remember that this is messing about with people’s livelihoods and with rural communities.

“I’ve 10 men on this boat, who are all from the local area, and I’ve two sons in the fishing industry – and it’s the same on all the other boats here.

“This is a family industry and it’s a fishing community. At the end of the day it’s a way of life here.”

Among those unloading the fish is McClenaghan’s son Mike. He is 21, and about to graduate from the National Maritime College of Ireland.

“Rockall is massively important to us. We do a lot of our fishing there every year, and it would be as massive loss to us and many other Irish vessels if we weren’t allowed to go back to fish there.

“This year there wasn’t as much fish in a lot of the fishing grounds closer to Ireland, so Rockall was even more important. If we lost it there’s no real substitute.

“I was starting to worry that this could be the end of my fishing career. The McClenaghans have been fishing in Greencastle for generations, and I was thinking when we landed that we might never see that rock again and that we would have few fisheries left to go to.

“It would be a massive loss to Greencastle. This is a fishing village and many of the shops and restaurants, the boatyard, the hardware store rely on income from the fishing vessels.”

Brian McDermott agrees. A chef and hotelier, he opened the Foyle Hotel in nearby Moville a year ago and relies on the fresh fish McClenaghan lands at Greencastle.

“For decades I’ve been listening to fishermen like Adrian [McClenaghan] tell us about Rockall and the fish and how good it is, and that’s why I come to Greencastle to source the fish.

“To lose it would be potentially catastrophic for the Greencastle and Moville area, and it’s about more than just getting your fresh fish from the pier.

“These guys have been at sea for a week in already risky waters to bring that produce back, and there has to be a sense of respect for that.

“Rockall has been producing for Greencastle for years, and to lose that would risk livelihoods. An entire industry and an entire area could potentially be wiped out if that fishing ground is taken away from Irish fleets.”

McClenaghan’s fear is that, if he were to be arrested and his boat seized, it is he who would bear the cost of getting his vessel released.

“It would cost me time, money, and they would take the catch off me,” he says.

“The [Irish] Government are saying they’ll back the fishermen, but if I’m arrested it’ll be me has the court case, not the Government.

“So far the Government has said they’ve given their full financial and legal backing to any boat that is detailed in Rockall, and I think having talks is the right way to sort it out.

“I do think it will be resolved, but I’m also fearful enough of what could happen if talks break down. I’m not 100 per cent sure it won’t be resolved without the Scotch arresting a boat.

“I’d be very friendly with Scottish fishermen as well, they fish up at Rockall too, and there’s never been an issue, but I think this is the Scottish National Party pulling a political stunt because they’ve lost the support of the fishermen and they didn’t realise how far it was going to go.”

When McClenaghan’s boat left Greencastle 10 days ago, the waters were calm; this morning they arrived back on dry land in the midst of a political storm.

“I’m not happy with it at all,” says McClenaghan. “It’s the last thing I would have wanted. I’m not a politician or anything, I’m not involved in the negotiations or talks. I’m a fisherman.”