Winter of industrial discontent spills over into spring

Analysis: Current unrest is a result of the Luas strike and moves on public service pay 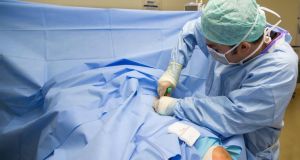 Six million euro will have to be found for the doctors’ accommodation allowance. Photograph: James Thomson/PA Wire 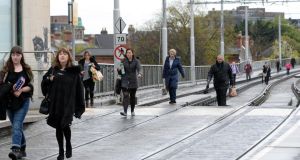 When final settlement proposals emerged in the Luas row they immediately spilled over into the State-owned CIÉ group. Photograph: Eric Luke 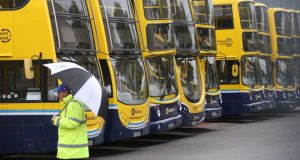 A perception that industrial action worked was reinforced after six days of strikes by Dublin Bus staff saw them receive a pay rise of 11.25 per cent over three years. Photograph: Colin Keegan/Collins 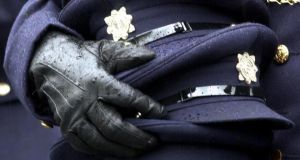 What would have been the first Garda strike was averted last November after the Labour Court proposed a €50 million package. Photograph: Bryan O’Brien 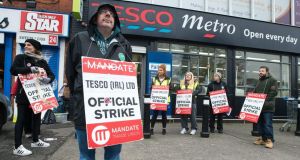 Tesco workers picketing outside Tesco Metro in Drumcondra on Friday include Ciaran Niall (foreground), who has worked for the retailer for 23 years. Photograph: Dave Meehan

Since he graduated as a doctor 18 months ago, Peter Corry has moved between four different posts in various hospitals in the midwest.

Regular job rotation is part of the career structure of young doctors, along with a requirement to do postgraduate studies and sit exams as they move from internship to senior posts.

The costs can be considerable. Doctors who study medicine on a postgraduate course can run up fees of about €100,000 over its four-year duration. Examination fees are more than €600.

The State provides some subsidies but they do not cover the full amount, Corry says. The Medical Council’s annual retention fee is more than €500.

Hospital doctors claim the financial pressure has grown since an annual €3,100 accommodation allowance was unilaterally abolished in 2012.

This “living out” allowance which Dr Corry and his colleagues have been seeking for several years will be reintroduced in July under a deal reached earlier this week between the Government and the Irish Medical Organisation.

A new process is also to be established to look at education supports .

Depending on one’s perspective, the agreement last Monday was either another example of pragmatic deal-making by the Government at a time of general economic and industrial relations uncertainty, or a further capitulation in the face of a threatened strike.

Over the last year the country has seen a wave of strikes and threatened strikes.

However, while industrial disputes seem to have been a regular feature of the news agenda in recent months, their scale is nowhere near the peak reached in the 1970s. In 1979 more than 1.4 million days were lost due to strikes.

But Central Statistics Office data shows that in the third quarter of 2015 not one day was lost as a result of industrial action.

Leaving aside the current disputes at Bus Éireann and Tesco, which relate generally to issues within their particular sectors, the origins of most of the disputes in recent months can be traced to three distinct issues: the decision by then minister for finance Brian Lenihan in 2010 to reduce pay for new-entrant public servants by 10 per cent; a botched attempt by the then minister for public expenditure Brendan Howlin in 2011 to reform public service allowances; and the Luas strike of 2016.

The lower salaries for post-2010 employees started the process of establishing a two-tier pay structure in the public service. This was exacerbated by the allowances initiative.

Howlin set out to generate annual savings of €75 million by reassessing the traditional system of allowances.

Ultimately, the government decided only one allowance paid to serving personnel would face the axe.

However, dozens of other allowances were scrapped for future employees.

In most parts of the public service the immediate consequences were limited because very few new staff members were being employed due to the recruitment moratorium.

However, when larger-scale recruitment resumed in 2014 the fault lines caused by the two -tier structure quickly became apparent.

The 2013 Haddington Road agreement sought to address the dual-pay system over time. However, the continued absence of the allowances meant overall earnings for recent entrants lagged behind.

Pressure over what was described as pay discrimination began to build up and formed a central part in campaigns by gardaí, teachers and doctors over the last year.

However, while the fallout from the 2010 pay changes and the abolition of allowances, as well as a general rise in expectations as the economy recovered, provided fuel for the anger in key parts of the public service, the impact of the Luas dispute cannot be overemphasised in any assessment of the background to the current fraught state of industrial relations.

The message that emerged from the Luas dispute was that after years of concession bargaining, where unions and staff traded a worsening of terms and conditions for greater job security, the tide had turned and strikes could work.

Even in the depths of the recession, pay increases were still being secured in some sectors.

Unions such as Siptu and Mandate quietly negotiated hundreds of pay rises, mainly in the 2- 2.5 per cent range, in manufacturing, pharmaceuticals and retail sectors.

Up to early last year it seemed likely this trend would continue. A survey of 500 private companies published last March suggested most of them would agree rises averaging 2.8 per cent in 2016.

In the public service, pay was tightly controlled by the Lansdowne Road accord which was scheduled to run until autumn 2018 and which promised a start to pay restoration, worth about €2,000 per person.

There was general incredulity when a claim by Luas staff for a 54 per cent pay rise over seven years emerged in late 2014/early 2015.

The Luas staff, operating the Dublin light-rail system, had initially been offered pay increases linked to the consumer price index . However, given that inflation was close to zero, the workers forecast this would give them very little.

While Luas is a private-sector operation, albeit operating under a public contract, pay developments in the company were always going to be watched very carefully in the public transport system and, by extension, in other groups in the broader public service.

Another key element that undoubtedly fuelled pay expectations was the pronouncement by politicians in the run-up to last year’s general election that austerity was over.

As early as March last year, while the Luas dispute was still raging, union leaders warned that the Lansdowne Road deal was fraying.

They set down a marker that they would seek acceleration of pay restoration if the economy continued to power ahead.

The Luas row involved 12 days of strikes and dragged on until the summer of 2016.

When final settlement proposals emerged, running up to 18 per cent over 55 months, they immediately spilled over into the State-owned CIÉ group.

A perception that industrial action worked was reinforced after six days of strikes by Dublin Bus staff saw them receive a pay rise of 11.25 per cent over three years, or 3.75 per cent annually. They had initially been offered about 2 per cent.

The Dublin Bus deal was very close to the terms of the Luas agreement on an annualised basis but well ahead of the norms across the labour market.

Unions in the CIÉ group immediately argued that the Luas/Dublin Bus terms should now set a benchmark for rises in Iarnród Éireann and Bus Éireann.

However, within Bus Éireann talk of pay rises was soon replaced by warnings of cuts as the company struggled to deal with mounting losses .

The Dublin Bus pay terms were also watched carefully by gardaí and second-level teachers in the Association of Secondary Teachers, Ireland (ASTI), who had never come into the Lansdowne Road tent.

Mid-ranking gardaí in the Association of Garda Sergeants and Inspectors warned the 11.25 per cent Dublin Bus deal had “inflamed” a simmering pay campaign by gardaí generally.

The Government argued the Lansdowne Road accord was sufficiently robust to address concerns over lower pay rates for more recent recruits.

A deal with firefighters in the dying hours of Howlin’s tenure as minister effectively set a precedent. Eventually, the government reached a €20 million deal on new entrant pay for teachers in the Teachers’ Union of Ireland and Irish National Teachers’ Organisation.

However, the ASTI continued to resist and disputes over new-entrant pay and other grievances saw schools close for a number of days last autumn.

While the Government held firm in the face of the ASTI action, Ministers were privately very worried about a threatened strike by gardaí.

The Government offered a €30 million deal to gardaí but this was rejected. However, on the eve of what would have been the first Garda strike, the Labour Court last November proposed a €50 million package.

This deal, which effectively increased annual payments to gardaí by €4,000 on average, ultimately headed off their strike but came at the price of unravelling the Government’s entire public-service pay strategy.

A month of so earlier, on the night of the budget, Minister for Public Expenditure Paschal Donohoe pledged there would be no change in 2017 to the structure and pace of pay restoration set out in the Lansdowne Road deal.

In the face of the cave-in to gardaí, other public-service groups were furious. As they saw it, gardaí were to receive more money by staying outside Lansdowne Road than others were getting by remaining inside it.

The Government rapidly retreated and eventually agreed to bring forward to April this year a €1,000 pay rise for 250,000 staff across the public service which was due to be paid in September.

It also promised earlier talks on a new overall pay accord to replace Lansdowne Road. These would commence once a public-service pay commission had reported.

Officially, the acceleration of the pay rise was conditional on industrial relations peace. However, the industrial-relations challenges to the Government continued.

Nurses rejected a deal on staff recruitment and retention and announced plans for a work-to-rule and strikes from March 7th.

The crisis at Bus Éireann has threatened to engulf the State public-transport system in industrial chaos.

The Government had allocated €290 million for public-service pay growth this year to cover the increases set out under Lansdowne Road. But as the pay concessions have continued, the bill has continued to rise.

The Garda deal will cost €50 million a year. The bill for accelerating the €1,000 pay rise will reach €120 million, while €6 million will have to be found for the doctors’ accommodation allowance.

Attempts to avert the nurses’ strike are continuing. The Government has proposed taking on 1,200 nurses this year but has resisted any movement on pay in advance of the pay commission process.

The Government calculated the nurses’ proposals to tackle recruitment and retention would have cost nearly €180 million.

The ASTI dispute remains unresolved with the potential for further escalation in the months ahead.

The so-called winter of discontent has moved on to spring with little change in the industrial relations climate.