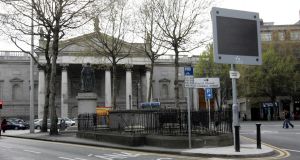 Directors’ remuneration at Bank of Ireland increased by 2 per cent to €2.87 million last year

Directors’ remuneration at Bank of Ireland increased by 2 per cent to €2.87 million last year. However, the remuneration of the bank’s chief executive Richie Boucher reduced by €3,000 last year to €958,000, according to its latest annual report, published on Friday.

No bonuses were paid to Bank of Ireland executives last year, a theme since the global financial crash in late 2008. The bank is 14 per cent State owned.