Wind warnings for Storm Diana lifted after gusts of 120km/h

Power continues to be restored to householders as weather front passes

Footage taken aboard a ferry en route from Holyhead to Dublin captures the rough conditions in the Irish Sea as Storm Diana rages over Ireland. Video: Steve Doherty/Declan Power/Reuters 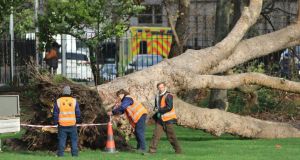 Thousands of homes across the country remained without power on Wednesday night as Storm Diana’s high winds eased and were replaced by wet and blustery conditions.

At the height of the storm, which had seen status orange warnings put in place for much of the country, gusts of over 120km/h were recorded and around 40,000 homes, farms and businesses were left without power.

There were about 200 areas across the State where Storm Diana damaged ESB’s networks, with low hanging and fallen power lines reported in multiple locations.

However by 6pm on Wednesday as the storm winds slackened, ESB Networks said it had restored supply to more than 35,000 homes, and a spokesman expressed optimism that the remaining homes and businesses which had been left without power as a result of the weather would be reconnected overnight.

There was spot flooding in many coastal areas in the south and south west and fallen trees left many roads across the country impassable. Motorists were also urged to exercise caution on motorways as the wind scattered debris across some major routes, although no serious incidents were reported.

More than a dozen flights in and out of Cork and Dublin airports were cancelled as a result of the weather with flights to and from airports in the UK worst affected.

A Status Orange warning which had been in operation across Galway, Clare, Kerry, Cork, Waterford and Wexford was lifted as was a status yellow warning in place for the entire country.

The strongest gust recorded was at Sherkin Island, Co Cork where wind reached 122km/h and Casement Aerodrome in Dublin and Roches Point in Cork which were both hit with gusts of 113 km/h.

“With the storm abating ESB Networks crews are now deployed and working to restore supply in southern areas where it is safe to do so. The damage is mainly attributable to fallen trees on overhead lines as a result of the high winds associated with the arrival of the storm overnight,” an ESB Networks spokesman said.

“We expect that the vast majority of the homes, farms and businesses without power at present will have their supply restored by tonight. ESB Networks apologises for any inconvenience caused.”

He said ESB Networks was “particularly appealing to farmers and landowners to be vigilant as fallen trees or branches may have fallen on or be leaning against electricity wires”. He warned people against approaching or touching wires, trees or branches “as they are extremely dangerous”.

Met Éireann forecaster John Eagleton said Storm Diana would be followed by some “typical November weather” with blustery conditions and showers ahead of a unsettled weather across much of the country over the course of the weekend.

Rain will gradually clear the east coast on Thursday morning with brighter weather set to extend countrywide. Showers will still fairly widespread but will be more frequent over the western half of the country.

Mr Eagleton said Thursday would be blustery with temperatures of between 8 and 12 degrees.

Diana is not on the list of Met Éireann and the UK Met Office’s official storm names for this winter. This storm originated further south and was named by the Portuguese authorities, but weakened as it travelled towards Ireland. The last Met Éireann named storm was Callum, which hit in mid-October. The next name to be used will be Deirdre.