Winchman receives award for rescuing fisherman tangled in a rope 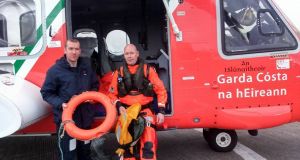 An Irish Coast Guard winchman was credited with “swift and extraordinary physical and mentally exhausting efforts” when conferred with an award this week by Britain’s Prince Philip.

Gary Robertson of the Sligo Rescue 118 helicopter was presented with the Billy Deacon search and rescue memorial trophy by the Duke of Edinburgh for his role in rescuing a fisherman who had become tangled in a rope.

The fisherman’s six-metre vessel had sunk and he was clinging to a lifebuoy in the water off Arranmore island, Co Donegal, when the helicopter was scrambled by Malin Head Coast Guard on April 9th, 2016.

The rope, some 30ft long and 1cm thick, was attached to the lifebuoy which was in turn tethered to the submerged boat and was wrapped three to four times around the fisherman.

As the winchman battled severe sea conditions and the downwash from Rescue 118, both he and the fisherman were consistently submerged.

His winch operator colleague on the helicopter “ deftly raised the winch” while the co-pilot “maintained a steady hover”, allowing Mr Robertson to access his knife and cut the ropes.

“The dynamic action of Gary Robertson, both in the water and in the aircraft, resulted in this casualty’s life being saved,” his employer, CHC Group, has said.

The trophy is named in memory of late Bristow Helicopters winchman Billy Deacon, who died during a Maritime and Coastguard Agency search and rescue (SAR) helicopter mission in 1997.

It is awarded to winchmen and/or winch operators working in the British and Irish search and rescue regions, and the RNLI lifeboat operations director chairs the award committee.

1 Ireland could lose out as France lays claim to most of €5bn Brexit compensation fund
2 Two men found dead in Dublin city centre
3 Metro South may be back on table as transport plans for Dublin are reviewed
4 Publican blames Covid-19 as Dublin’s Dice Bar to shut for good
5 Boy (4) left in hospital for over two years due to Tusla and HSE failings, report says
Real news has value SUBSCRIBE