What’s the beef? Six things you need to know about the beef dispute

What are they fighting about and how does this impact consumers? 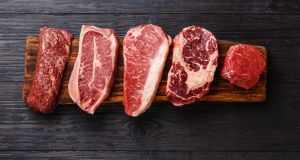 Early on in the dispute, the Irish Cattle and Sheep Farmers’ Association (ICSA) warned that supermarkets would have no beef to stock their shelves. Photograph: iStock

What are they fighting about?

Money, of course. Three weeks ago farmers began to blockade processing factories when simmering tensions over the price of beef came to a head. There were other points of argument too but in the main farmers were annoyed at not getting enough of the money that flows through the supply chain, making their profession unviable. Processors, those who buy the cattle and turn them into meat products, say the prices simply reflect a depressed European market.

What are these blockades?

Farmers, in varying numbers, simply turn up at the factory gates and impede the movement of trucks. On Monday at least 14 factories were still being blockaded around the country bringing production to a halt. So far the industry has said about 3,000 workers have been laid off and pickets have shut down 80 per cent of production with no sign of a cessation. Meat Industry Ireland, representing processors, have alleged intimidation, verbal and physical abuses, blackmail and vandalism by some protesters.

What did the factories do about it?

They took them to court. High Court orders were granted against a number of protestors and these legal actions have formed a central aspect of the ongoing dispute. As the acrimonious situation began heading in the direction of talks, however, many of the proceedings were struck out on agreement. Processors also agreed to suspend cases as an olive branch before negotiations but many of the blockades persisted, vexing industry officials.

Did they not reach an agreement?

Eventually they did, but it quickly appeared to fall apart. After one aborted effort to convene negotiations last week, the various organisations, including seven representing farmers, finally sat down and hammered out a proposal. It stipulated a range of bonus payments for farmers and sector reforms in return for ending blockades. But just when cracks in the impasse appeared to be showing many of the farmers determined to win base price increases rejected the proposals and continued their protests. Meat Industry Ireland said base price was not, and could not be discussed as part of negotiations. It was, it said, determined by the market.

How does this affect you?

Well not in any major way, so far. Early on in the dispute, the Irish Cattle and Sheep Farmers’ Association (ICSA) warned that supermarkets would have no beef to stock their shelves. This doesn’t appear to have happened quite yet but there are concerns about what will happen if supply trucks keep getting stopped at the gates. In one notable consumer development, Aldi announced it would begin telling its shoppers that the beef they are buying was Irish, but was being processed in UK facilities.

That is the question. On Monday, as the stitching in the deal slowly disintegrated, farmers continued to mount their blockades. This prompted a severe warning from industry as to what was likely to follow. It said the protests were doing massive irreparable damage with customers going elsewhere in Europe for their beef. Thousands more jobs are under threat, it said.