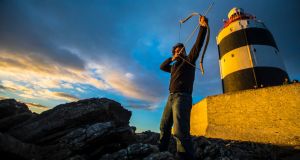 Calling all would-be Robin Hoods - Hook Head Lighthouse in Co Wexford is the place to head for this New Year’s Day when archers, amateur and expert, will participate in a 400-year-old tradition to mark out a local council’s claim over land and sea.

The Dunbrody Archers from New Ross will join chairman of New Ross Municipal District Council Cllr Willie Fitzharris, from nearby Wellington Bridge, to shoot an arrow into the sea from Hook Head Lighthouse in South Wexford

Cllr Fitzharris explained “the tradition dates back to 1687, when the mayor and the corporation of New Ross Town Council claimed their authority over the tower and waters by travelling to the point of the Hook and shooting an arrow into the sea from Hook Head Lighthouse.”

And so, on New Year’s Day, the Dunbrody Archers, founded in 2004 and now, one of the largest archery clubs in the country, will assist Mayor Fitzharris in the “arrow ceremony” where the mayor will cast an arrow into the sea, symbolising the port’s authority over the estuary.

Hook Lighthouse, which is owned by Commissioners of Irish Lights, will also play host to another local tradition on New Year’s Day when local children will participate in Daisy Day by searching for the first daisy of 2018, with all participants rewarded for their efforts.

“The child who found the first daisy would win the hunt, but lots of children would receive pennies from the families in the area. This New Year’s Day will see the hunt take place and children receiving a chocolate penny for their efforts,” she said.

The oldest intact working lighthouse in the world, Hook first assisted mariners in the fifth century when local monks, led by Dubhan, a missionary to the Wexford area, lit fires on the headland to warn ships of the dangerous rocks on the headland.

The existing tower was built by Strongbow’s son-in-law, William Marshall, Earl of Pemboke, as a guide for ships bringing cargo to the town of New Ross which he founded some 30 kms up the estuary from the sea and it dates from the 12th century

Visitors to Hook Head this New Year’s Day can take the Hook Lighthouse Tour which involves climbing some 115 steps to the top, where they can see holograms illustrating the history of the ancient tower and the Hook area with its spectacular views of the southern coast.