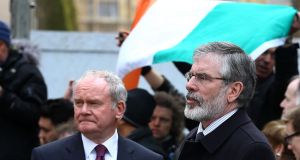 It is highly likely after votes are cast on May 7th that Pat Doherty will be elected for a fourth time as West Tyrone MP but the Sinn Féin veteran won’t be resting on his laurels.

Despite being a safe seat for Sinn Féin, Doherty took 48.4 per cent of the vote last time, the party doesn’t do complacency and he is keen to maximise the vote.

The incumbent is out and about canvassing in the main two towns of Omagh and Strabane, where his constituency offices are, as well as touring villages such as Clady, Glebe and Loughmacrory, to share the key messages from the republican party’s island-wide project.

“It is a good strong area but it’s only good because we work at it constantly, all the time, as councillors and MLAs and the MP,” he says.

Doherty (69) was born in Glasgow to Irish emigrant parents from Donegal, where he moved back to live in 1968 and has been based since.

Concentrating on “big strategic issues” is his strength, he says, and explains the biggest single issue across the constituency is the A5 motorway linking Derry to Aughnacloy. 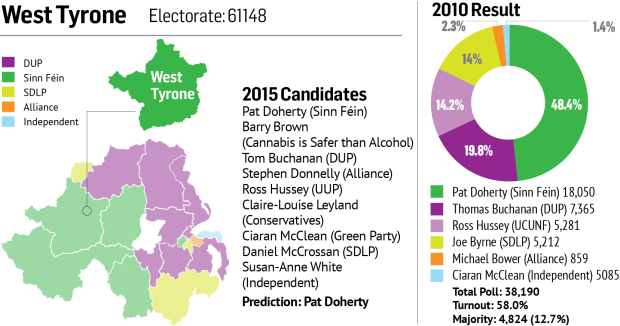 This is followed by concerns around enhanced hospital services in Omagh, lack of employment, particularly in Strabane, and agricultural reform, in the constituency which is two-thirds rural.

Social media has become a focus for Sinn Féin and has seen Doherty share what “happiness is” to him during the campaign, including a video clip where he is dancing with MEP Martina Anderson and even an old photo of himself with party president Gerry Adams and Barry McElduff MLA on the swings at the Grange Park in Omagh.

“Happiness is looking at old pics and coming across a clinker,” he wrote on Twitter.

“It is now visibly starting to show signs of success with the growth of Sinn Féin in the south, the steady growth in the North and the serious way that we deal with our business up at the Assembly and Leinster House, taking campaigns to Westminster, arguing and explaining our case internationally whenever that is required.

“There is a real buy-in that the vision we set out a number of years ago is starting to take shape.”

In 2010 unionist challengers for the West Tyrone seat were the DUP’s Tom Buchanan and the UUP’s Ross Hussey, with the latter standing as a candidate for the ill-fated Unionist-Tory link up UCUNF (Ulster Conservatives and Unionists New Force). Doherty won more than 11,000 votes more than either man. Both of the unionist MLAs are standing again in the British general election and the SDLP have chosen Daniel McCrossan to vie for the nationalist vote.