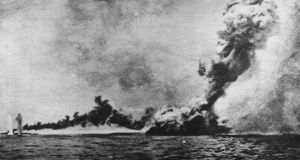 The HMS ‘Queen Mary’ explodes during the Battle of Jutland. Arthur Kidney from Barryroe died when the ship went down. Image: Ohne Angabe/Wikimedia Commons

One hundred years on, two west Cork communities has marked one of its darkest days when six men from the area perished in the Battle of Jutland.

Six men, including two brothers, from Courtmacsherry and Barryroe, who lost their lives in the the first World War naval conflict in 1916 have been commemorated with a monument to their memory.

Jim Crowley was on the committee that came up with the idea of commemorating the local men who died in the North Sea and elsewhere during the war.

“It was 20 years ago that Bandon unveiled its memorial to those who died in World War I and World War II and it included some from Courtmac and Barryroe and Timoleague, ” said Mr Crowley.

“A few of us started thinking we should have our own memorial and we decided that 2016 should be the year given six from the parish died on the one day in the Battle of Jutland in 1916.”

The committee used Gerry White and Brendan O’Shea’s book about Cork men who died in the first World War, A Great Sacrifice, as a starting point.

The result was a list of 29 men from Courtmacsherry and Barryroe who died during the war.

Given Courtmacsherry and Barryroe’s long association with the Royal Navy, it was perhaps hardly surprising that so many local men should die at the Battle of Jutland on May 31st, 1916.

Committee member Tony McCarthy explained that the first Barryroe man to die in the battle was Arthur Kidney who died when the HMS Queen Mary was hit by a German battlecruiser.

“The next four Barryroe sailors to die in the battle were brothers, David and James Brickley from Lehina and their neighbour John Falvey and Thomas Henry Reynolds from Courtmacsherry.

“They were all crew on the cruiser HMS Defence which sank with 903 sailors on board when she was hit by several German dreadnoughts and exploded in an inferno and was gone in minutes.

“And the sixth Barryroe man to die that day was David Courtney from Courtmacsherry who died on board the HMS Warrior which was fighting alongside the HMS Defence during the battle.”

The names of all six sailors along with 23 others from the parish have now been recorded on two slabs of Kilkenny granite on a monument erected at Lislevane near Barryroe village.

Mr Crowley said : “I grew up in the village of Courtmac and I went to school there and yet I knew nothing about the men from the parish who perished fighting in the First World War.

“These poor men were the forgotten men really – they were written out of history but now 100 years, they are at least remembered in their own parish with this monument and it’s there forever.”