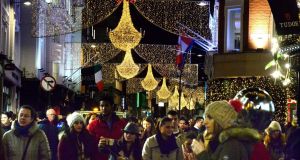 Dublin city will be lit up for Christmas with a series of illuminations so bright they will be visible from planes arriving at Dublin Airport.

The project is building on similar projections and light displays in Paris and Sydney. A spokeswoman said Winter Lights is a “totally new concept for Dublin city”.

Among the buildings due to be lit up are City Hall, Liberty Hall, the civic offices on Wood Quay, the Mansion House and the Customs House.

A council spokeswoman said: “We have created Winter Lights Dublin City to bring Christmas lights and building projections to more locations and people than ever before.

“This means that it is not a single event but takes place over thirty nights to give everyone the opportunity and space to experience the lights and projections, at a time that suits them.”